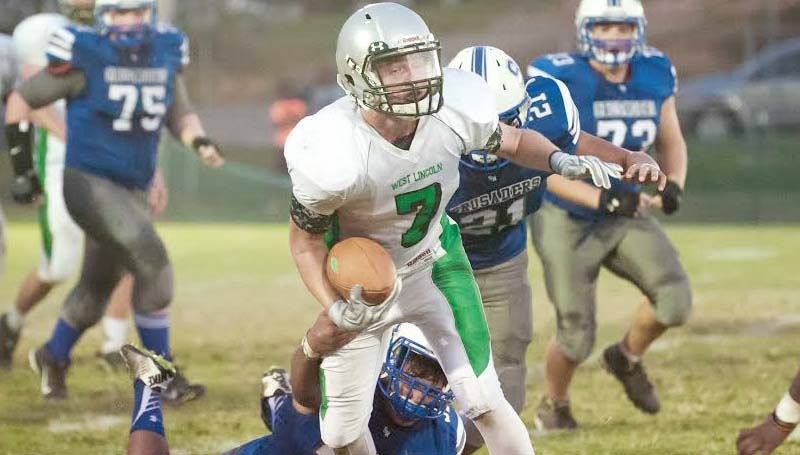 HATTIESBURG – The West Lincoln Bears suffered a heart-breaking loss in the closing seconds of Friday night’s game, falling to the Sacred Heart Crusaders 18-14 in a hard-fought battle.

Down by 4 with 21 seconds left on the clock, West Lincoln’s Jayden Rushing hit Lofton Sills for an 80-yard touchdown pass as time expired to give the Bears the win, but it was called back on an ineligible receiver down the field penalty, and Sacred Heart escaped with the victory.

In the opening quarter, neither the Bears nor the Crusaders could get on the scoreboard.

Midway through the second quarter, Sacred Heart managed to capitalize on a fumble by the Bears near the goal line to go up 6-0. The Bears’ defense held strong to deny the Crusaders on the two-point conversion.

West Lincoln battled back and threatened to score in the second quarter, as quarterback Jayden Rushing completed two passes to Chase Owen and Lofton Sills but failed to get it in the end zone as the horn sounded to close out the first half.

With 3:55 seconds left in third-quarter, Jayden Rushing put the Bears on the scoreboard with a 7-yard rushing touchdown followed by a successful two-point conversion to put the Bears up 8-6.

The Crusaders charged back to regain the lead with 8:23 remaining in the fourth quarter on a 60-yard pass but again the Bears spoiled their two-point conversion attempt.

The Bears received the kickoff on the followed possession and returned the ball 38 yards to start their offensive drive. Jayden Rushing managed to push the ball across the goal line to give the Bears a 14-12 lead with 4:17 left.

In the final minutes of the contest, Sacred Heart put together a long drive to drain the clock and managed to reclaim the lead at 18-14 after scoring a touchdown with 29 seconds left in the game.

“You never want to lose, but losses like tonight are the toughest, said West Lincoln coach Charlie Jackson. “Our boys fought until the very end. I am very proud of their efforts. We have a saying that we quote regularly. There will be obstacles, there will be mistakes, there will be doubters, but with hard work there are no limits. We faced obstacles tonight. We faced mistakes tonight. There will be doubters that still wonder if West Lincoln football is the real deal, but make no mistake about it; the boys at West Lincoln have worked and will continue to work to be competitive and successful on and off the field of play.

“I would like to thank my coaching staff,” Jackson said. “They are a great group to work with. I would also like to thank my wife and two boys. They sacrifice week in and week out to allow me to pursue my passion for coaching and impacting the lives of young men.”

West Lincoln travels to Sumrall Friday to face the Bobcats at 7 p.m.