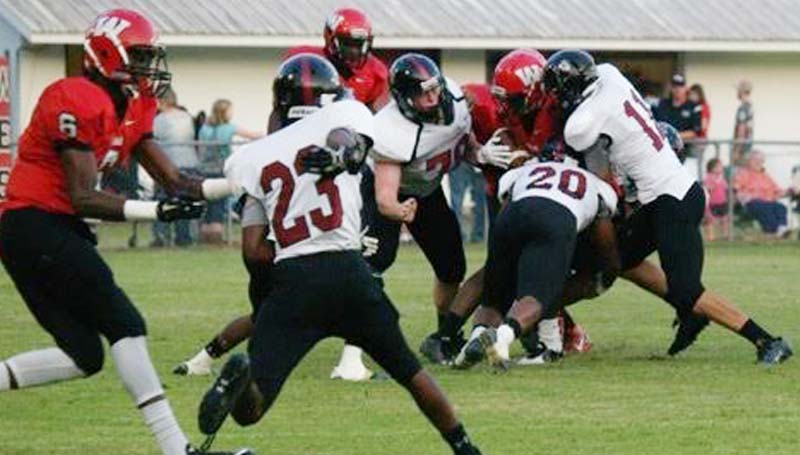 Friday’s game was a story with three distinct chapters. Chapter one had West Marion rolling to a 20-0 lead, looking like an unstoppable juggernaut. Next, Lawrence County clawed back into the game, and even into the lead, scoring three straight touchdowns, to grab a brief 21-20 lead. In the final chapter, however, West Marion re-claimed control, scoring the final 14 points of the game, to earn the win.

With the win, Brad Duncan’s Trojans improved to 2-0 on the season. West Marion won 11 games last fall and played all the way to the South 3A championship game. The Trojans have played for South State three of the last six years and, powered by Miller, appear primed to make a similar run in 2015. Lawrence County, under second-year coach Jaymie Palmer, fell to 1-1 on the campaign. The Cougars will play their first home game Friday, hosting the Ole Brook Panthers.

“We didn’t have a good night,” Palmer said. “I appreciate the way our guys fought back after falling so far behind. But I thought we were flat all day, and never really got it in gear. Give credit to West Marion. They did a great job and deserved to win the game.”

West Marion received the opening kickoff and struck almost immediately. On the Trojans’ second play from scrimmage, Miller scrambled around, and found Adrian Miller for 42 yards. On the next play, the Miller-to-Miller combination went for 33 yards and a touchdown.

The Trojans’ next possession produced six more points – and more Josh Miller heroics. The dynamic senior passed for 38 yards to Money Gaddis, setting up Miller’s own nine-yard touchdown run. It was 12-0 with 3:50 to play in the first quarter.

“Their quarterback is a great player,” Palmer said. “He’s one of the best in the state, and he showed it tonight.”

After a Lawrence County punt, Miller was at it again. First, he ran for 35 yards. Four plays later, facing fourth-and-11 from the LCHS 16-yard line, Miller scrambled for the goal line, losing the football right at the goal line and the orange pylon. When the ball rolled out of bounds in the end zone, Cougar fans were hoping for a touchback. But the official on the spot ruled a touchdown, and West Marion had an 18-0 lead. Miller passed to Adrian Miller for two points, giving the Trojans a 20-0 margin.

All was not lost for the Cougars. On Lawrence County’s ensuing possession, Quitten Brown dashed 58 yards for a touchdown, cutting West Marion’s lead to 20-7. Joshua Stephens made all three extra point attempts after LCHS touchdowns.

Brown provided most of Lawrence County’s offense against West Marion. The junior rushed for 173 yards on 11 carries, with 120 of those yards coming on two touchdown runs.

The Lawrence County defense created turnovers on West Marion’s final two possessions of the half. The first was a Chris Rhodes’ fumble recovery, and the second was a pass interception by defensive tackle Brandon Armstrong. After Armstrong’s interception, near the end of the half, the Cougars had a major scoring chance. But West Marion foiled a fake field goal attempt by Lawrence County as the half expired.

The second half began with another Lawrence County threat falling short. A 30-yard run by T-Tez Cole got the Cougars deep into West Marion territory, but the Trojan defense again held.

Minutes later, it was another play by Cole, on the defensive side of the football, that gave Lawrence County a chance. With West Marion driving, Cole intercepted a Miller pass and returned it 65 yards for a touchdown. It was suddenly a 20-14 game.

Shortly after that, after the LCHS defense forced a West Marion punt, Brown broke loose for 62 yards and a touchdown. Stunningly, Lawrence County, which seemed to have been left for dead early in the game, found itself with a 21-20, with 3:22 left in the third quarter.

Lawrence County’s highlights ended there. With just over nine minutes left in the game, an errant punt snap set West Marion up with a first-and-goal at the LCHS three-yard line. Caleb Batie scored one play later, and Josh Miller ran for two points giving West Marion a 28-21 lead.

“Obviously, that was a big play at the time,” Palmer said, “but let’s not put too much emphasis, or blame, on one play. We got outplayed on plenty of plays tonight. That was just one of them. Aside from that, our special teams had a pretty good night.”

After two more Lawrence County possessions failed to produce a first down, Miller finished the Cougars off with a 10-yard touchdown run in the final minute of the game.

West Marion outgained LCHS 428-245 in total offense, with Josh Miller and Caleb Batie accounting for almost all of the Trojans’ yards. The Trojans also led in time of possession, controlling the football for more than 28 minutes in the 48-minute game.

Defensively, Cole, who plays inside linebacker for Lawrence County, had a very active night. Along with the interception and return, Cole was unofficially credited with 14 tackles, and Azar Myles had 10.

MEADVILLE – Chris O’Quinn’s 13 tackles and an interception powered the Franklin County Bulldogs to a 19-0 win over South... read more