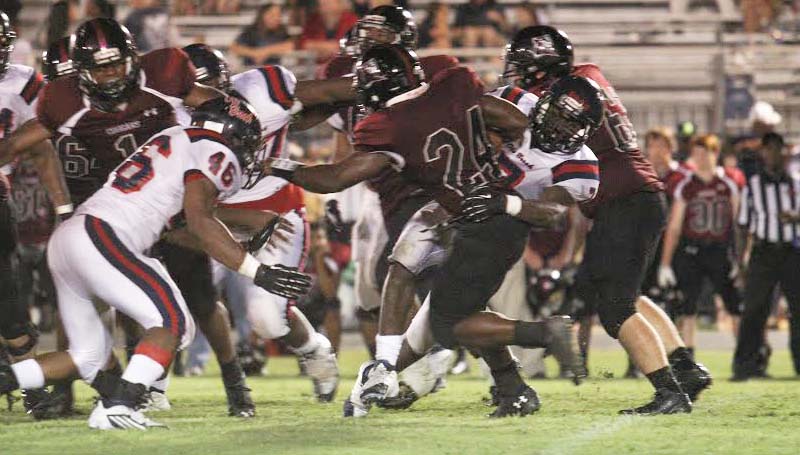 Lawrence County got five touchdowns from junior standout Quitten Brown, and converted four Brookhaven turnovers into touchdowns, to roll to the big win. Midway through the third quarter, the Cougars held a 55-18 lead and would take a 55-33 win to the locker room.

With the win, Lawrence County, under second-year coach Jaymie Palmer, improved to 2-1 on the season. The victory over Brookhaven was just the sixth for the Cougars, in a series that dates back to 1990.

“It was a good night for us,” said Palmer, “but don’t be deceived by the score. There wasn’t anything easy about it. We protected the football, made some big plays, and were able to cash in on their mistakes.

“Obviously, Quitten had another big night, and T-Tez (Cole) gave us an incredible game on defense. Brookhaven has a good, big, physical team, and they played hard to the very end. It was a rough game, much tougher than the score shows.”

Brown rushed for 172 yards on 17 carries and three touchdowns. He added a 23-yard touchdown reception, and, on defense, he returned a pass interception for a touchdown. The junior dynamo has scored 11 touchdowns in Lawrence County’s first three games.

Lawrence County scored on three of its first five offensive possessions to grab a quick 20-0 lead. The Cougars’ first score came on a Charl’Tez Nunnery-to-Brown touchdown pass that covered 23 yards. It was set up by a 32-yard completion to Marcus Atterberry.

Late in the first quarter, a lengthy Ole Brook possession stalled at the LCHS 19. On the very next play, Brown dashed 81 yards. It was 14-0.

With 2:12 left in the first quarter, Brookhaven suffered a major setback when senior quarterback Jon Mark Mathis was knocked from the game by a bruising hit from LCHS linebacker T-Tez Cole. Freshman Sevante Quinn replaced Mathis and gave it a game fight, but the turnover bug would plague the Panthers after Mathis exited.

On the third play of the second quarter, Nunnery scored on a quarterback keeper, giving Lawrence County a 20-0 lead.

Brookhaven fought back with a five-play, 65-yard drive. Willie Bates scored on a 1-yard run, set up by a 39-yard Quinn-to-Darrian Wilson pass. Midway through the period, after a Cole fumble recovery, Brown scored on a 22-yard jaunt. After a Brookhaven punt, Lawrence County’s Rykendrick Harness scored on a 44-yard reverse. It was 34-6 with 3:41 left in the half.

Undaunted, the Panthers fought right back, as Poole broke loose on an 83-yard touchdown run. With 1 minute left on the clock, Ole Brook got the football back after a Lawrence County punt. This time, it was Brown the defender who burned the Panthers. He intercepted a Quinn passed and raced 35 yards for a score.

Taking back over with 39 seconds left in the half, the Panthers fought back again. Poole raced for 36 yards, setting up Bates’ second one-yard touchdown run of the night, which came with four seconds left on the clock. The wild scoring frenzy ended with Lawrence County leading 41-18.

The turnover bug bit the Panthers again at the start of the second half. Lawrence County’s KeMarcus Brown intercepted Quinn passes on two of Brookhaven’s first three offensive plays. Both interceptions resulted in LCHS touchdowns. First, Brown scored on a 12-yard run. The second set up Nunnery’s 18-yard score. With 5:03 left in the third quarter, Lawrence County held a 55-18 lead.

To the Panthers’ credit, they absolutely did not quit, scoring on their next two possessions. With 3 minutes left in the third, Poole broke loose for 45 yards and a touchdown. After a Lawrence County punt, Brookhaven drove down the field again, mostly on the strength of Poole and the Panthers’ offensive line. Traveon Murray finished off the scoring with a three-yard touchdown run.

“We just made too many mistakes early,” Clopton said, “and to Lawrence County’s credit, they capitalized on them – made them hurt. We’ve got to eliminate turnovers and big plays to give ourselves a chance to win.”

Quinn completed 9 of 25 passes, for 102 yards, and was intercepted three times. Defensively, the Panthers got a game effort from linebacker Wesley Calcote, who was in on a total of 13 tackles. Deion Williams had seven tackles, and Greg Watts had six.

Lawrence County’s defense was led by T-Tez Cole, who turned in one of the school’s all-time great defensive efforts. Cole was credited with a whopping 22 tackles, six of them for losses, and recovered a fumble.

This Friday, Lawrence County will travel to Prentiss. Brookhaven will host McComb.

Daily Leader / Amy Rhoads / Loyd Star retires Peyton Flowers’ jersey No. 42 prior to the game as the... read more