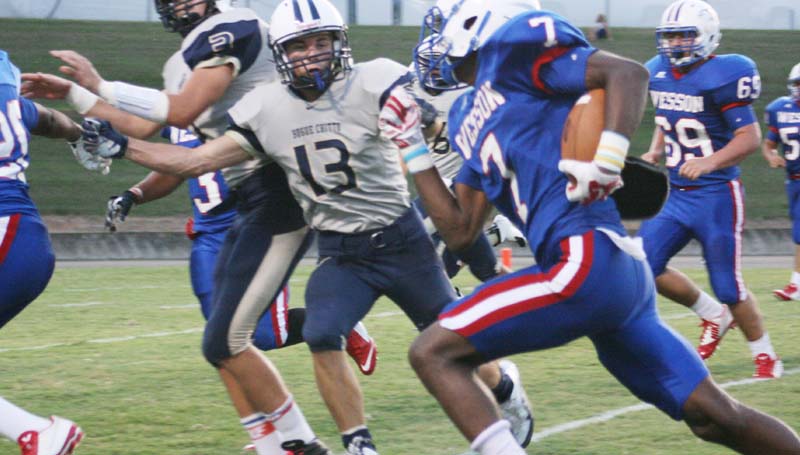 WESSON – The Wesson Cobras’ running backs – and depth in the lineup – were too much for the young Bogue Chitto Bobcats to handle Friday night as the Cobras cruised to a 44-8 win at Stone Stadium.

“It is always good to get a win at home,” said Wesson coach Ronald Greer. “The guys played hard on both teams. We came out a little sluggish at first but managed to overcome it as the game went on. Overall, I was very pleased with my players’ efforts.

“Bogue Chitto has a very young team, but they are well-coached,” said Greer. “Our thoughts and prayers our with the two Bogue Chitto players whom were injured tonight.”

Bogue Chitto had two players to leave the game by ambulance due to injuries in the first half. Both have been released from the hospital.

In the opening quarter, the Cobras and Bobcats battled in a scoreless contest until the 6:08 mark, when junior running Eric Rhymes broke free from BC’s defense to cash in a 15-yard touchdown run to give Wesson a 6-0 lead.

After a series of defensive battles, the Cobras punched in another touchdown on a five-yard run by Jermaine James with 1:44 left. Trey Fleming was successful on the extra point kick to give Wesson a 13-0 lead to end the first quarter,

In the second quarter, Wesson’s offense and defense took control as they outscored the Bobcats 18-0.

Wesson’s Cornelius Barlow scored on a nine-yard run with 8:10 left. James provided his second touchdown of the night on a 25-yard scramble with 6:25 left and Jemarcus Patterson punched in Wesson’s final touchdown of the first half on a 16-yard run with 2:03 remaining. The Cobras took a commanding 31-0 lead into halftime.

In the second half, the coaches agreed to a running clock to move the game along quickly. Both teams utizlied numerous players to give them some valuable experience on the field.

Wesson added another touchdown with 5:57 remaining as Jermaine James picked up his third and final touchdown of the night on a two-yard plunge. The Cobras led 38-0 after Logan Channell kicked the extra-point.

In the final quarter, Wesson cashed in their final touchdown of the game with 11:43 remaining as freshmen quarterback Slay Acy scrambled in a 10-yard run.

Bogue Chitto managed to break up Wesson’s shut out bid with 9:18 remaining in the fourth period as Kolby Roberts broke free to cash in a 15-yard rushing touchdown. The Bobcats were successful on the two-point conversion as Connor Douglas connected with Dee Dillon on a pass play.

Connor Douglas directed the Bobcats’ offense by completing 12-of-22 passes for 117 yards. Dee Dillon led all receivers with six catches for 49 yards. Roberts rushed for 39 yards on 11 carries

The Cobras (2-1) will be on the road Friday as they visit Seminary. The Bobcats (0-3) will travel across Lincoln County to battle the West Lincoln Bears. Kickoff is at 7 p.m.