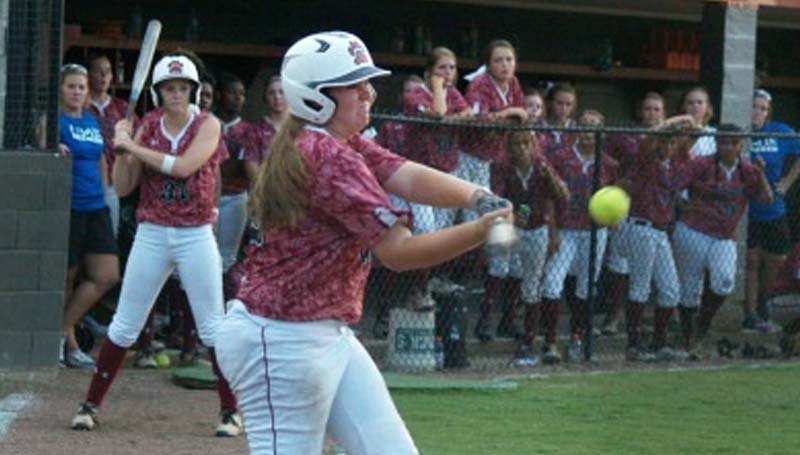 MONTICELLO – Lawrence County hammered North Pike in Division 6-4A slow-pitch softball action Tuesday evening at Lawrence County High School. Meleah Howard’s Lady Cougars carved out a 3-0 lead through four innings, then put the game away with an offensive outburst in the fifth and sixth. The game was halted, via the 10-run rule, in the bottom of the sixth inning.

With the win, Howard’s girls improved to 10-2 overall, and 3-0 in the division. Unless North Pike beats LCHS just as bad or worse in a meeting next week, the Lady Cougars will win the division title.

“We had a good night,” said Howard. “We pitched and defended really well, but we’ve pretty much done that all season. What was different tonight is that we swung the bats well, too. It all made for a very solid effort on the part of our girls.”

Lawrence County got two runs in the bottom of the first, with Maddux Kirkland getting an RBI single, and Zyon Feazell driving a run home with a booming double to left. In the bottom of the third, Tyranesha Davis led off with a single, moved to third on a Josey Nations double, and scored on a Jordan Harp sacrifice fly. It was 3-0.

North Pike, meanwhile, was having very little offensive success against LCHS pitcher Barri Rogers and the Lady Cougar defense. The Lady Jaguars got just four hits in the game, and only one North Pike base runner got as far as second base. That came when Jamie Spears laced a two-out double to center in the top of the third. She was left stranded, however, when Lawrence County’s Kirkland raced down Madison Bates’ drive to deep left, ending the inning. Linley Smith, Janay Maxwell, and Whitley Howell had singles for North Pike.

In the bottom of the fifth, Lawrence County broke the game open. Kirkland had another RBI single, and Feazell followed that with a mammoth three-run homer over the center field wall. It was 7-0.

LCHS ended the game with three more runs in the bottom of the sixth, all of them coming with two outs.

Jordan Harp and Josey Nations led Lawrence County with three hits each. Feazell, Kirkland, Tyranesha Davis, and Amanda Rushing each had two. Sydney Pevey and Abbie Errington each got one hit.

Lawrence County also improved to 8-0 in junior varsity play, winning by a 5-0 score.

Lawrence County will play at Wesson on Thursday night.