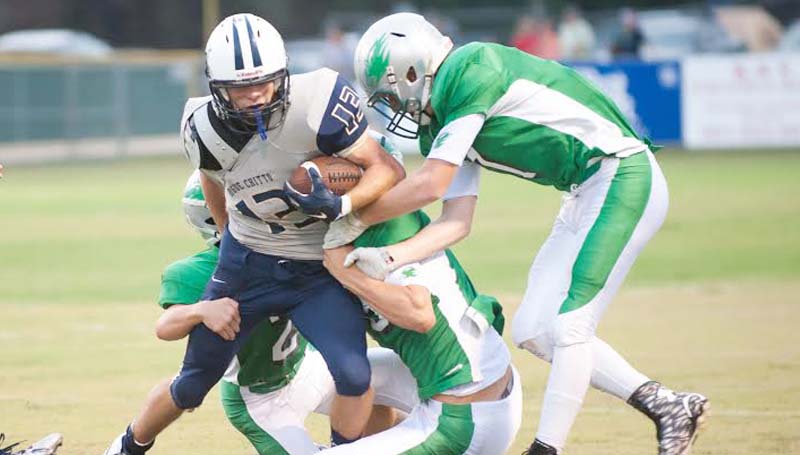 The West Lincoln Bears scratched out a 37-6 homecoming victory over the Bogue Chitto Bobcats Friday night at Perry Miller Field.

“Tonight’s win was a great win,” said West Lincoln coach Charlie Jackson. “I am proud of our guys. We are continuing to improve each week, and we are excited about the future of West Lincoln football. Winning against Bogue Chitto was a historic win for us. I hope that our guys enjoy this win this weekend, but understand come Monday we will start preparing for Pass Christian.”

On the Bobcats’ opening drive, BC advanced down the field on two quick first downs before the Bears’ defense could manage to stop the drive and take over.

West Lincoln’s offense was able to put points on the scoreboard first when quarterback Jayden Rushing completed a pass to Chase Owen for a 14-yard strike. The kick by Patrick Nottingham was no good.

With 1:30 left in the second quarter, Bears quarterback Jayden Rushing completed a 32-yard touchdown pass to Chase Owen. The extra point kick by Nottingham was good and West Lincoln took a 13-0 lead into halftime.

In the second half, the Bobcats cut into West Lincoln’s lead early in the third quarter when senior tailback Kolby Robert showed off his speed and scored on a 60-yard run with 10:06 remaining in the third quarter. The Bobcats elected to go for the two-point conversion, but were unsuccessful and led 13-6.

West Lincoln’s offense answered on their next possession as Rushing completed another pass to Owen for a 6-yard touchdown strike with 5:50 left in the third quarter. The two-point conversion attempt by Rushing was no good as West Lincoln extended its lead to 19-6.

In the final period, it was all West Lincoln as Julian Anderson cashed in a 1-yard touchdown run with 9:16 left.

“I was proud of the way my team fought,” said BC coach Gareth Sartin. “We just missed out on several big plays. We must learn to finish drives. West Lincoln played hard and came up with big plays when they really needed them.”

Offensively, the Bears finished with 387 yards. Jayden Rushing completed 11-of-18 passes for 197 yards.

Chase Owens was the top receiver for West Lincoln with nine receptions for 170 yards and four touchdowns. Chance Lacking led the Bears’ rushing attack with 11 carries for 73 yards and one touchdown.

The Bobcats finished with 197 yards of total offense. Connor Douglas completed 11-of-21 passes for 65 yards. Kolby Roberts led Bogue Chitto in receiving and rushing with five receptions for 43 yards and five carries for 91 yards.

Jayden Rushing and Chase Owen each had an interception. Brennan Cagle and Julian Anderson recorded a quarterback sack each.

The Bears (2-2) will return to action Friday as they welcome Pass Christian to Perry Miller Field. The Bobcats (0-4) will also be at home Friday night as they entertain the Stringer Red Devils at Troy Smith Field. Both games start at 7 p.m.