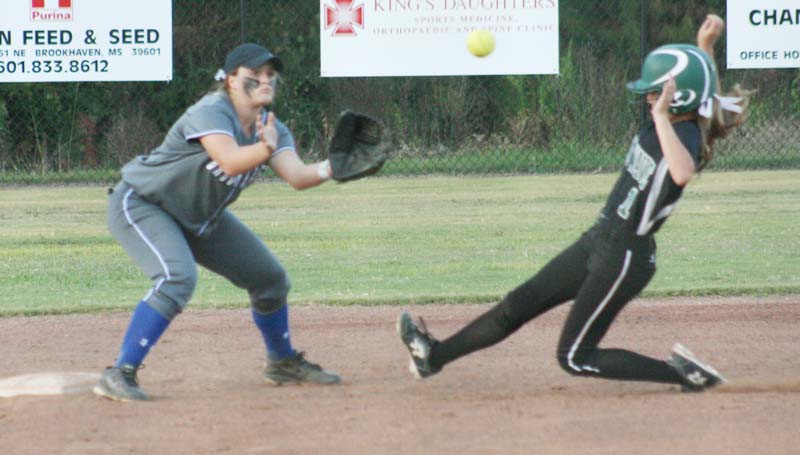 Daily Leader / Marty Albright / Brookhaven Academy’s second baseman Allison Livingston waits on the throw from home plate to record the out at second base as Cathedral runner Baylee Granning (1) slides in Tuesday night.

The Lady Cougars needed a sweep to keep their playoff hopes alive, but could only manage a split.

In Game 1, Cathedral squeezed out a narrow 2-1 victory in a eight inning contest to spoil BA’s dreams. In Game 2, the Lady Cougars battled back to secure a split in the doubleheader with a 6-5 win.

“We have had a very tough district schedule and this was just another example of the level of competition we face every day,” said BA coach Becky Flowers. “Allie Summers pitched a fantastic game in Game 1 with 14 strikeouts, but our lack of execution with runners on base has continuously haunted us throughout our season and unfortunately that’s our story tonight in the 2-1 loss. In Game 2, we managed to recover and had some breaks that allowed to score more runs. Overall, I’m proud that we found a way to battle back and get a win.”

The Lady Cougars (11-11, 2-6) will continue action Saturday as they travel to Jackson to play in the Jackson Prep softball tournament.

Game 1 was a pitchers’ duel as both teams scored only one run each in the first three innings and the game remained tied after seven innings were completed. 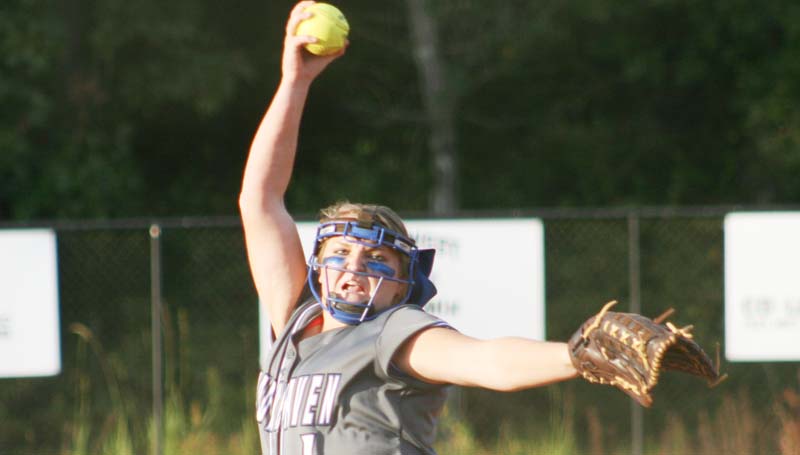 In the top of eighth inning, Cathedral struck first and scored a go-ahead run from second base to claim a 2-1 lead before BA could record the final out.

In the bottom of the eighth inning, the Lady Cougars started with a runner on second base and worked hard at the plate to advance their team home, but Cathedral’s defense denied their attempt to squeeze out a narrow victory.

Elizabeth Smith was the winning pitcher for Cathedral with eight strikeouts and two walks.

Allie Summers suffered the setback on the mound for the Lady Cougars with an impressive 14 strikeout and two walk pitching performance.

Smith paced the Lady Green Wave’s offense with a double. Baylee Granning and Grayson Bryant had a single each.

In Game 2, the Lady Cougars managed to overcome a slow start to plate three runs in the third inning to take a 3-2 lead.

Cathedral battled back and regained the lead in the fourth inning after scoring two runs to claim a 4-3 lead and added another run to their lead in the fifth inning to take a 5-3 advantage.

In the sixth and the seventh innings, Brookhaven Academy charged back and outscored the Lady Green Wave 3-0 to secure a 6-5 lead and held on to secure the win.

Summer pitched the win for BA with two strikeouts and two walks.

Elizabeth Smith took the loss on the rubber for Cathedral with four strikeouts and two walks.

Anna Grace Covington powered the Lady Cougars’ offense with a double and a single. Summers contributed two singles. Cameron Watson had a single.

Abby Brown and Haley Ellis were the top hitters at the plate for the Lady Green Wave with a double each. Fisher Isminger hit a single.