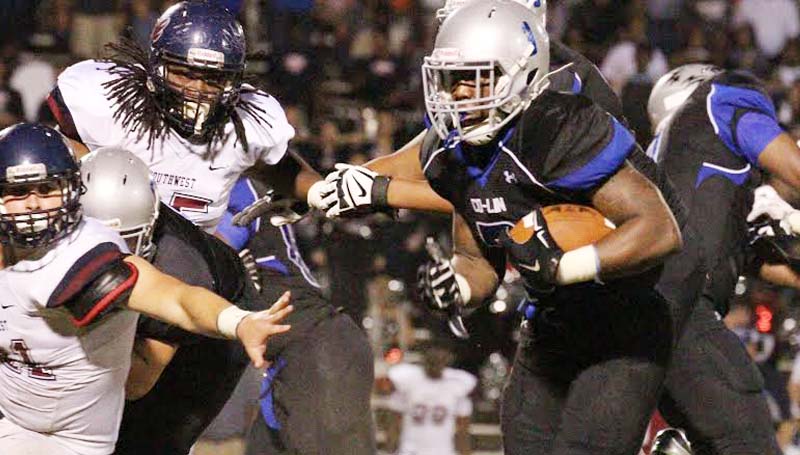 WESSON – With the strong legs of kicker Greg Nickels and running back Lakedric Lee, the No. 1-ranked Co-Lin Wolves rallied to defeat the Southwest Bears in a thrilling 29-26 overtime victory Thursday night at Stone Stadium.

“It is good to get the win,” said Co-Lin coach Glenn Davis. “Southwest came out and fought us until the very end. It was a great game for both teams. We were very fortunate to rally back to get the win. Overall, we did not play our best offensively, but our defense did a great job keeping us in the game. We still have a lot of things to improve on as we prepare for next opponent.”

Trailing 16-14 at halftime, Co-Lin’s defense fought hard against a determined Southwest ball club to keep the game close in the second half. Offensively, the Wolves managed to work the ball up and down the field, but struggled to put the ball in the endzone. 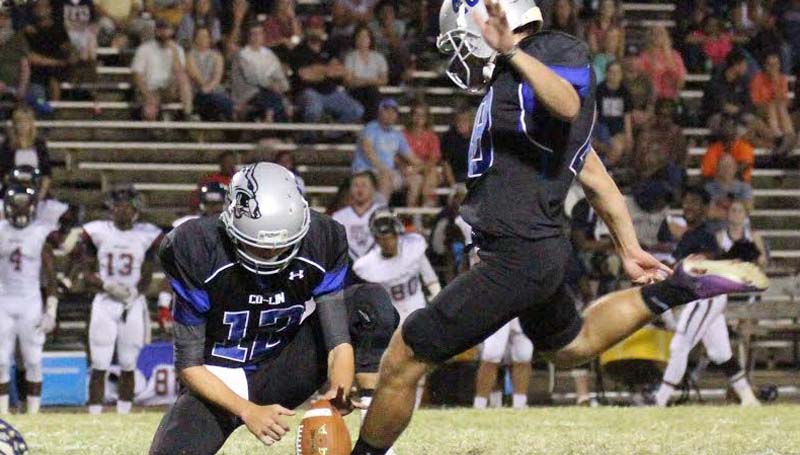 Nickels had a huge night for his Wolves as he nailed three field goals, with an average of 35 yards, in the second half – including a heart-stopping 36-yard field goal as time expired in the fourth quarter to force overtime.

In overtime, Southwest received the ball first and threatened on several attempts to score a touchdown, but the Wolfpack defense stood strong and held their ground to force the Bears to kick a 42-yard field goal, which was made by Reed James.

Co-Lin took over in overtime and took only three quick plays to punch the ball in the endzone as Lee rushed in a 7-yard touchdown to give his Wolves a 29-26 overtime victory.

“This was a great game,” said Southwest coach Tucker Peavey. “Co-Lin’s obviously has a great, talented team and they showed it at the end to get the win. Overall, I thought our guys played with great effort, intensity and emotion. We executed better than we have on offense (in previous games) and that’s what it’ll take and hopefully we can repeat that performance.” He said he felt bad for his players because “I think they played their hearts out.”

In the first quarter of action, the Wolves came out and quickly scored the first touchdown of the night as Lee scramble in a 5-yard rushing touchdown to give Co-Lin a 7-0 lead after Nickels kicked the PAT with 11:56 remaining.

The Bears’ offense controlled the rest of the first quarter as they marched down the field and scored on a 8-yard touchdown pass from quarterback Tyler Shell to Brookhaven alumni Justin Blue with 5:25 left. James missed the PAT to tie the game and Co-Lin led 7-6 after one quarter complete.

In the second quarter, Southwest continued to dominate as the Bears’ offense worked patiently up and down the field to keep Co-Lin’s offense on the sideline.

The Bears rifled off 10-unanswered points to take a 16-7 lead after James kicked a 34-yard field goal with 11:23 left and Shell hooking up with freshmen receiver Mike Macon on a 67-yard touchdown strike with 6:37 remaining.

Co-Lin’s offense managed to battle back into the contest late in the second quarter as Lee scored his second touchdown of the night on a 12-yard run with 3:01 left. Nickels made the extra-point kick and Co-Lin trailed Southwest 16-14 at the half.

In the third quarter, the Wolves and Bears battled back and forth in an exciting defensive bout as the score remained the same, until the 3:55 mark when Blue plowed through CL’s defense to punch in a 9-yard rushing touchdown to give the Bears a 23-14 lead.

In closing minutes of the third period, the Wolves march down the field and cut into Southwest’s lead after Nickels kicked a 36-yard field goal with 1:32 left as the Bears led 23-17 at the end of the third quarter.

In the final period, Co-Lin’s defense dominated as they held Bears scoreless. Offensively, the Wolves moved the ball. Nickels kicked a 32-yard field goal with 8:01 to cut into Southwest’s lead again at 23-20.

After getting the ball back from Southwest in the final minutes, Co-Lin quickly worked the ball down the field to get inside the redzone. With time running out, the Wolves made two great attempts to score a touchdown but each pass was incomplete. With 7 second lefts, Nickels came out and nailed his third field goal attempt to tie the game at 23-23.

For Southwest, Shell led the Bears’ offense, completing 9-of-15 passes for 183 yards and two touchdowns. He also rushed for 57 yards on 10 carries. Blue was the second leading rusher with 9 carries for 48 yards.

The No. 1 ranked Co-Lin Wolves will be on the road next week when they face East Central. The Bears will also be in action Thursday as they travel to Poplarville to face Pearl River. Kick off is 7 p.m.

PEARL – The Brookhaven Lady Panthers traveled to Pearl and handed the Lady Pirates a 4-1 loss Thursday night in... read more