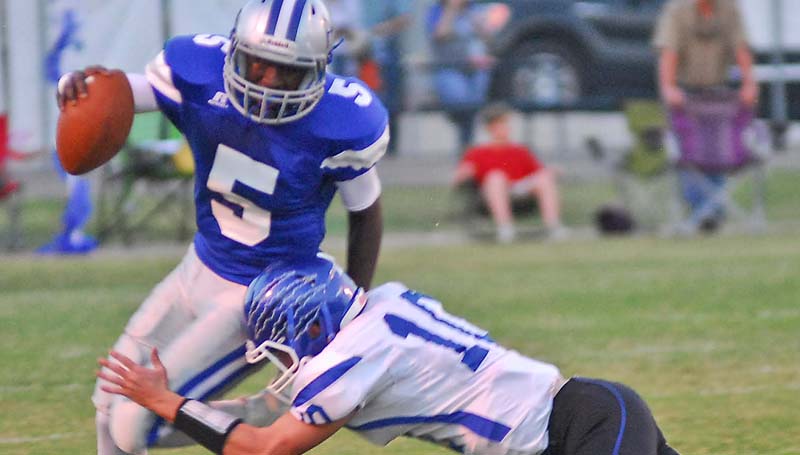 Quarterback Carlos Woods was efficient completing eight of his nine passes for 203 yards and four touchdowns. The Rebels also had a balanced ground attack with 126 yards rushing.

Sam Butler started the scoring for ACCS in the first quarter when he hauled in a 75-yard pass from Woods.

Chisum Mardis pushed the Rebel lead to 14-0 a few minutes later on a 16-yard touchdown run.

The onslaught continued when Woods hooked up with Shaverick Williams from 15 yards out and then found Richard Conn from 46 yards out to give ACCS a 28-0 lead after just the first quarter.

The Rebels added another touchdown in the second quarter. Woods tossed his fourth touchdown of the night, this time a 31-yard pass to George Scott.

Chris Thompson added a 23-yard field goal to give ACCS a 38-0 lead at halftime.

Devin Gray capped the scoring with an 11-yard run in the third quarter.

Carter Culbertson was the top receiver for BA with three receptions for 22 yards. Ross Felder and Zach Carr combined for four receptions and 53 yards.

Defensively, Connor Griffin led the Cougars with 7.5 tackles, including two tackles for loss. Roger Rushing and Culbertson combined for 8.5 tackles and one tackle for loss by Rushing. Keegan Smith added four tackles.

The Cougars (0-5) will return home to R. M. “Red” Stuard Field, after a two-week division road tour, to celebrate homecoming as BA welcomes Columbia Academy to Lincoln County in a battle of Cougars. The homecoming court festivities begin at 6 p.m., followed by the kick off at 7 p.m.