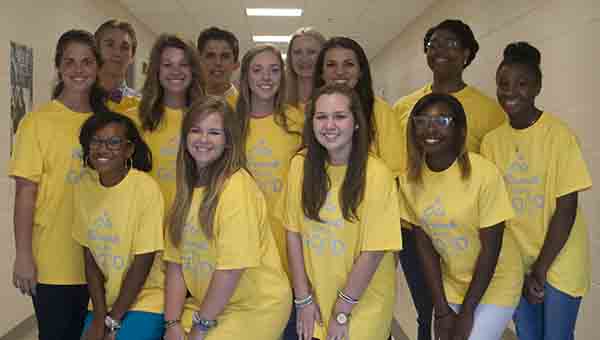 This Friday the Panther family is coming together to paint the stands gold. Brookhaven School District will be raising money and awareness for childhood cancer during the football game against South Jones.

“I was thrilled when I heard,” Ellie Phillips said.

Phillips is a first-grade teacher at Mamie Martin Elementary who has been impacted greatly by pediatric cancer. She taught Kaley Wilkerson, who died in June after a long battle with brain cancer. Phillips was one of two teachers who worked with Kaley at home as her health began to decline.

But that was not her first contact with pediatric cancer. In 2010, her own daughter, Maggie Cupit, was diagnosed with a form of bone cancer. Cupit was forced to take a leave of absence from school and live at St. Jude’s for a year.

“The chemotherapy these kids have to take is so strong,” Phillips said. “It’s debilitating. Maggie was at St. Jude’s for a year, and she felt bad for two years.”

Phillips said the fear of pediatric cancer isn’t over once a child goes into remission because there is the chance of relapse. She said with most pediatric cancers the prognosis after relapse is never good.

“I just knew my little Kaley was going to be OK, and then she relapsed,” she said.

Cupit, who now serves as an ambassador of St. Jude’s while attending medical school at the Mayo Clinic, said she is proud and grateful her hometown showing support.

“The more we raise awareness about childhood cancer, the more funding will be directed towards saving lives and finding treatments,” she said.

Unfortunately, monetary donations are not as high for pediatric cancer research as for other common cancers.

“The rarer the disease the less money pharmaceutical companies invest,” Cupit said. “Unless we stand up for children with rare illnesses like cancer, no one will.”

However, this year could be a sign of changes in the future.

“This year is the first time I’ve seen people change their pictures on Facebook for Childhood Cancer Awareness month,” Phillips said. “The more people are aware the more money will be given for research.”

“In order to support the Going Gold campaign, there was a need for gold shirts in the community,” Krista Russell, the NHS adviser, said. “We wanted people to be able to participate and to do something to benefit the people we will honor.”

Time was not on their side as NHS members rushed to pull it all together. The idea was suggested on Sept. 3. It was OK’d by the administration on Sept. 6. That gave NHS members just five days to sell T-shirts.

But sell they did. Across the entire district, they sold 205 shirts and were able to raise $886. That money will be donated to Batson Children’s Hospital in Jackson. Russell said their top sellers were Tia Bussey, Shaniya Jackson and Anna Katelyn Smith.

“Thank you to all the people who are wearing gold,” Phillips said.

Panther Park and the stadium is expected to bring the community together in support of all the children that have fought against cancer.

“It means the world to me that my town cares,” Cupit said.