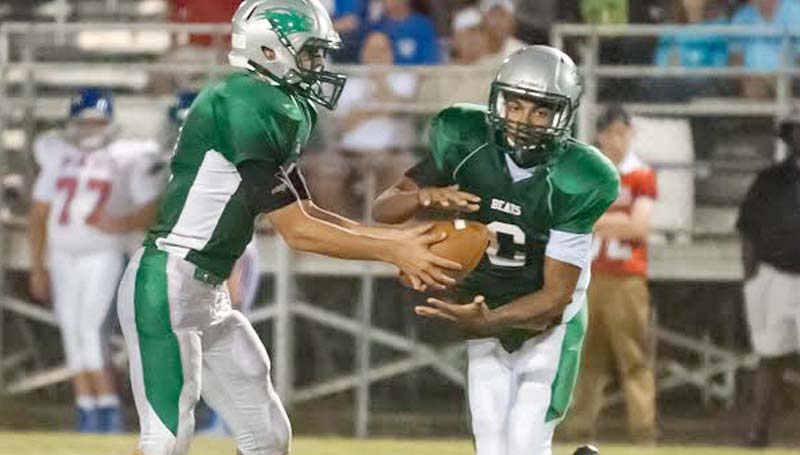 The turnover bug plagued the West Lincoln Bears from the start as they dropped a 42-0 decision to the Pass Christian Pirates in a non-divisional contest Friday night at Perry Miller Field.

The Bears received the kickoff to start the first quarter but suffered an early turnover on a quarterback fumble on the opening offensive play. The Pirates quickly capitalized on the fumble recovery and went up 7-0 on a rushing touchdown.

West Lincoln went back to work on its next offensive possession but fumbled the ball again on a run by Chance Lacking, which allowed Pass Christian to take over on the 20 yard line. The Pirates would score again on a run as West Lincoln faced a 14-0 hole in the first quarter.

The Bears’ offense would settle down on the next possession and convert on a 4th and 1 but was unable to continue down the field and was forced to punt.

Pass Christian relied heavily on its running game to advance the ball to West Lincoln’s 13-yard line before Dillon Griffin recovered a fumble for the Bears.

West Lincoln quickly moved the ball down field on a 5-yard pass from Jayden Rushing to Chase Owen followed by a 20-yard pass to Lofton Sills. The Pirates would stop the Bears to end the first quarter of play, forcing West Lincoln to punt to start the second quarter.

Pass Christian’s opening play of the second quarter was a 60-yard touchdown run, giving the Pirates a 20-0 lead.

West Lincoln suffered a quick three and out on the next possession forcing the Bears to punt from the 17-yard line. The Pirates would give West Lincoln’s offense another shot as they ran into kicker Lofton Sills, giving the Bears another offensive possession from the 32-yard line. The Bears struggled to move the ball against the Pirates’ defense and was forced to punt.

Pass Christian would score on its next two possessions to increase their lead to 33-0 at halftime.

The Pirates started the third quarter like West Lincoln did in the first with a turnover. The Bears would gain excellent field position on their opening series after Aaron Byrd caused the Pirates to fumble and Julian Anderson recovered the fumble on the 26-yard line. The Pirates would get the ball right back after recovering a Bears’ fumble to start their offensive drive at mid-field.

Pass Christian took a commanding 40-0 lead to end the third quarter of play.

In the fourth quarter, West Lincoln managed to move the ball against the Pirates’ defense on several occasions but were unable to get into the endzone. The final score came on a bad snap from West Lincoln that went into the endzone as Rushing recovered it but was tackled for a safety to secure a 42-0 victory.

“Pass Christian has a good football team, but our guys never gave up,” said West Lincoln coach Charlie Jackson. “The guys fought hard even though there were times throughout the game that they could have easily given in. I am so proud of our players and coaches.

“We must continue to improve each week,” said Jackson. “Our schedule this year is extremely difficult, but we will continue to coach and develop our players. We have a week off to regroup and prepare for district play.”

The Bears (2-3) will be off Friday to prepare for their first Region 7-2A road test on Oct. 2 against the Bassfield Yellowjackets.