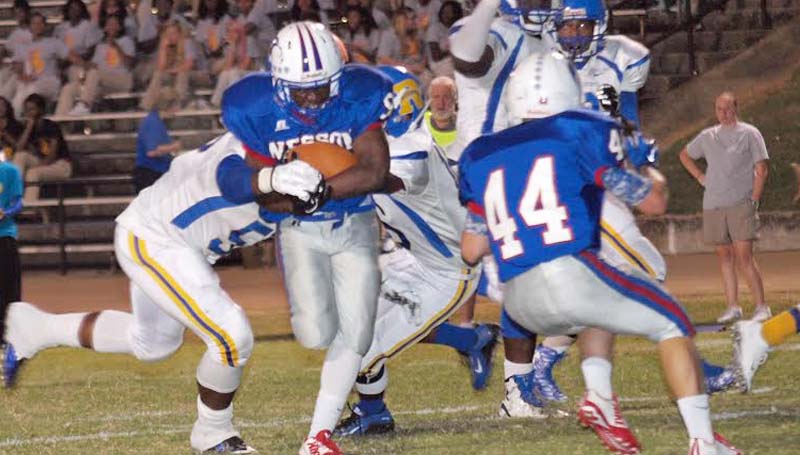 Daily Leader / Tracy Fischer / Wesson running back Cornelius Barlow (9) clutches the ball the as Raymond’s defenders Jemerio Washington (5) and Preston McGowan Jr. (16) tries to strip it from behind Friday night at Stone Stadium.

WESSON – The Raymond Rangers escaped with a 14-10 victory Friday night to spoil the Wesson Cobras’ homecoming celebration at Stone Stadium.

“I felt like our team came out flat after a tough loss last week,” said Cobras coach Ronald Greer. “Mistakes in the kicking game really hurt us giving Raymond a short field on several occasions. Turnovers, penalties and missed tackles cost us the game.

“Our guys did a great job fighting back at the end of the game, but it was too little too late,” said Greer. “We have to learn how to play four quarters in every game. Now, we need to refocus and start preparing for our last non-division game of the year before heading into our tough region schedule.”

The Rangers showed up ready to play Friday night and put the first points on the scoreboard on their first drive when Derrick Turner rushed to the endzone and ran in the two-point conversion.

The Cobras struck back by moving the ball down the field to earn four first downs, and Cornelius Barlow cashed in a 13-yard rushing touchdown. Kendrick Brown scored the two-point conversion to tie the game at 8-8 at the end of the first. The score remained the same at halftime.

Derrick Turner scored a rushing touchdown for the Rangers to give Raymond a 14-8 lead at the end of the third quarter.

In the final period, Cobras quarterback Peyton Burns hooked up with Jermaine James to get the ball inside the red zone but ended up throwing an interception in the endzone on the next play. The defender was tackled for a Cobra safety.

Wesson received the ball back in the closing minutes as the pressure was mounting for the Cobras. Burns connected with Cornelius Barlow to get the Cobras within scoring distance. With :08 on the clock, Burns hit Barlow in the endzone, but the referees disagreed and called the play out of bounds as the game ended with a 14-10 loss for the Cobras.

Offensively, Wesson ran for 195 yards on 57 carries. Peyton Burns completed 4-of-11 passes for 37 yards to give the Cobras a total of 232 offensive yards.

Cornelius Barlow led the Cobras with 12 carries for 75 rushing yards and a touchdown. He also caught four passes for 37 yards. Jermaine James had 10 carries for 55 yards.

Defensively, the Cobras were led by Kendrick Brown with seven tackles. Bobby Pritchard had four tackles.

The Cobras (2-3) will travel to Mt. Olive Friday night to face the Pirates. Kickoff is at 7 p.m.