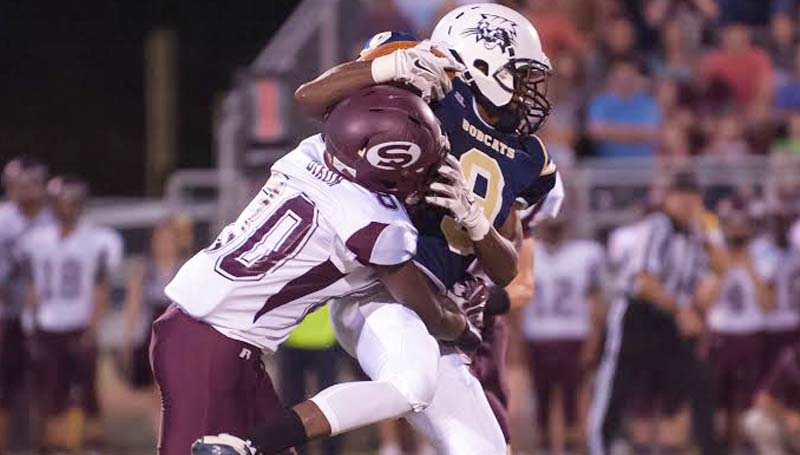 BOGUE CHITTO – The Stringer Red Devils torched the Bogue Chitto Bobcats in a 43-14 victory Friday night in a Region 4-1A action at Troy Smith Field.

In the opening quarter, the Bobcats came out the gate firing on all cylinders with a couple big receptions by Dee Dillon. At the 8:27 mark, the Red Devils’ defense stood strong to force the Bobcats to turn the ball over on downs. Stringer would produce a touchdown after the big defensive stand. Qwavyious Gandy would find the endzone on a 50-yard scamper, and Auston Myers’ PAT was good to give Stringer a 7-0 lead.

In the second quarter, Auston Myers nailed a 31-yard field goal at the 8:38 mark to add to Stringer’s lead at 10-0. The Devils’ special teams would come up big on the following play as they recovered an onside kick, which took the air out of the Bobcats.

Devin May would find the endzone later in the drive to score on a 2-yard run, and Myers’ PAT was good to secure a 17-0 advantage.

With 3:17 remaining in the second quarter, Stringer’s Jaquan Amerson would score on a 6-yard run, and Myers’ PAT was good.

The Bobcats would finally get on the board late in the second quarter, when Kobe Roberts scored on a 4-yard reception. The two-point conversion by BC was no good.

With 1:18 left, Stringer managed to punch in two more touchdowns to take a 30-6 lead into halftime.

In the second half, the coaches elected to run the clock to get the game over quickly. Will McCord scored a touchdown for Stringer on a 3-yard run to push the Devils lead up to 43-6.

Before the end of the contest, D.J. Nunnery had a big run around the end to set up Dee Dillon’s 21-yard touchdown reception, and the Bobcats’ two-point conversion was good as Stringer led 43-14.

The Bobcats (0-5) will travel to Walthall County Friday to battle the Salem Wildcats. Kickoff is at 7 p.m.