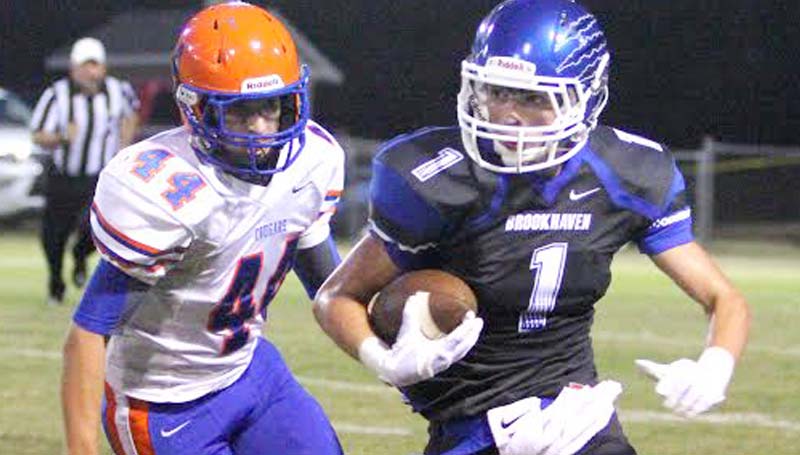 “This was a big division win for us,” said Columbia Academy coach Larry Dolan. “BA has a very young athletic team, but they fought until the end. Overall, I was very pleased with my guys’ efforts. We came in and executed our game plan early and came away with the win.”

The Cougars from Columbia came out and quickly overpowered Brookhaven Academy with their size and depth to secure a 28-0 lead at halftime.

In the first quarter, Columbia scored its first touchdown on a four-yard run by Heath Greenlee with 6:38 remaining. Wiley Cleland kicked the extra point to give Columbia a 7-0 lead.

In the second period of action, Columbia continued to control the game as they scored 21 points to push their lead to 28-0 before halftime.

Greenlee cashed in his second touchdown of the night for Columbia with 11:16 remaining on a 1-yard plunge. Cleland nailed the extra point.

Quarterback Wiley Cleland not only used his legs to score, but his arm as well as he connected with Cam Havard on a 29-yard touchdown pass with 9:09 left. Columbia was successful on the two-point conversion to lead 22-0.

Cleland hooked up with Greenlee on his second passing touchdown with a 28-yard strike to paydirt with 3:22 left.

In the second half, Columbia picked up where they left off as Greenlee scored on a 90-yard sprint with 11:34 left.

Columbia’s final touchdown came with 5:35 remaining in the third period as Greenlee punched in his final touchdown on a 3-yard run. After that score, under MAIS rules, the clock continued to run to quickly end the game.

Brookhaven Academy made several good drives throughout the game, but every time the Cougars managed to get near the red zone, Columbia would come away with an interception to spoil BA’s scoring opportunities.

“Offensively, we managed to move the ball a lot better tonight against a very good Columbia team,” said BA coach Blake Purvis. “Defensively, we were just outmatched in size and depth to compete. Overall, I was very pleased with our guys’ efforts. They played hard on every play until the very end.”

Offensively, Madison Smith was the leader for BA completing 18-of-28 passes for 110 yards and rushing for 22 yards on three carries.

Ross Felder was the top receiver for BA with six catches for 49 yards. Fisher Warren caught four passes for 34 yards.

Heath Greenlee and Colton Sandifer powered the ground attack for Columbia with nine rushes for 68 yards each.

Wiley Cleland completed 4-of-6 passes for 80 yards and two touchdowns. Greenlee and Havard led the receivers with one catch each for 29 and 28 yards.

BA (0-6) travels to McComb next week to battle the Parklane Pioneers. Kickoff is at 7 p.m.