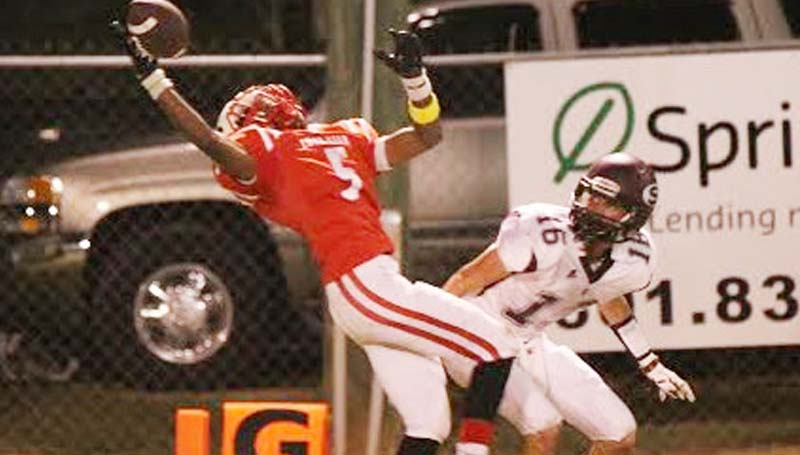 “This was a good game,” said Stringer coach John Brown. “Loyd Star has a very good team and they were tough to block. Overall, I was pleased with our team’s efforts. We managed to make the adjustments we needed to defend Loyd Star’s five-man line, despite having a young team. Our guys did a great job competing in the game and made good plays we needed to win.”

The Red Devils began the game with an onside kick on the opening kickoff, which they recovered. Stringer relied on its rushing game to score the first points of the contest with 9:07, which was led by Qwavyious Gandy. The Devils elected to go for two-point conversion but were stopped by the Hornets.

In the second quarter, the Hornets punched in their first points of the game when quarterback Parker Flowers ran in a 4-yard touchdown to tie the game at 6-6.

After a great defensive stop by the Hornets, Loyd Star’s offense took over and was pinned on the 1-yard line. Stringers’ defense caused the Hornets to fumble the ball in the endzone, which was recovered for a safety with 8:20 remaining in the second quarter.

The Hornets quickly marched down the field for their second score of the half when Flowers punched in another rushing touchdown. Loyd Star elected to go for the two-point conversion but was unsuccessful. Loyd Star took the lead at 12-8.

With 1:01 left in second quarter, the Red Devils reclaimed the lead at 14-12 with a late touchdown.

The score remained the same until the 6:49 mark of the third quarter when the Red Devils found the end zone on a 4-yard touchdown pass from Caleb Dyess to Deven May to push the Red Devils lead to 22-12 after adding on the two-point conversion.

In the fourth quarter, the Red Devils scored another touchdown with 9:16 left to secure a 29-12 lead.

With 2:06 left in the game, Deven May cashed in a rushing touchdown to give the Devils a 35-12 lead.

With 7 seconds left, Loyd Star scored the final points of the night on a rushing touchdown by Avery Leggett. The Hornets were successful on the two-point conversion attempt and the game ended with the Devils winning 35-20.

“Stringer has a very good, well-coached team,” said Loyd Star coach Adam Cook. “Their guys played hard and were very supportive of each other. Overall, I thought my guys played hard throughout the game, but we made too many mental mistakes against a good team like Stringer.”

Offensively, Flowers led the Hornets with 117 yards rushing and had 56 yards passing with two interceptions. Michael Harvey contributed to the Hornets’ ground attack with 46 yards rushing.

The Hornets (2-4) will begin Region 7-2A action next week as they travel to Liberty to take on Amite County Trojans (4-1). The Red Devils (3-3) will also be traveling as they invade Hattiesburg to battle the Sacred Heart Crusaders (2-3). Kickoff for both games is at 7 p.m.