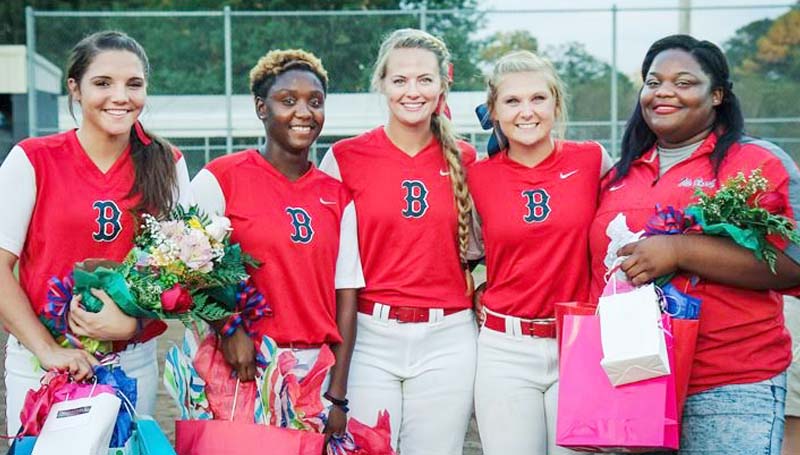 The Brookhaven Lady Panthers celebrated Senior Night with a 14-2 win over the Pearl Lady Pirates Tuesday at the Ole Brook softball complex.

“We hit the ball really well tonight. We have a good group of seniors that stepped up and showed leadership,” said BHS Coach Mandy Vinson. “It was good to get a win on Senior Night.”

With the win over Pearl, Brookhaven improves its division record to 6-0 with two more district games left on the schedule. The Lady Panthers’ overall season record is 15-6.

The Lady Panthers came out strong in the first as lead-off batter Macy Ziskin hit a single and later scored when Katherine Shell belted a two-run home run to bring the score to 2-0. Madison Thompson also got a single in the first inning, but was not able to score.

In the second inning, the Lady Panthers continued their offensive onslaught as Cheyenne Motley started the inning with a walk, Kat Wallace got a single, Haley Speaks hit a sacrifice fly to advance the runners, Reagan Atterberry got a walk, Ziskin hit a single, Jada Henderson got a double, Shell produced a double, Fallon Brooks hit a single, Thompson hit into a fielder’s choice, followed by Tia Bussey walking. Motley was back in the batter’s box for a second time in the same inning and hit into a fielder’s choice, while Wallace and then Speaks also got extra bats in the second inning.

The Lady Panthers were able to score nine runs off five hits in the second.

At the top of the third inning, the Pirates scored their only runs for the evening.

In the fourth inning, Shell hammered another home run over the fence at the Mamie Martin field to spark the Lady Panthers. The tape-measure shot went over the centerfield fence and stopped rolling in the church parking lot across the street.

Following Shell, several batters hit into fielder’s choices, but errors by the Pirates kept the Panther’s going. Wallace hit a single in the fourth inning. At the conclusion of the bat, Brookhaven had scored three more runs to bring their total to 14 runs.

At Pearl’s last bat, they were not able to produce any hits, nor any runs, thus bringing the game to an end in the middle of the fifth inning.

Leading for BHS in hitting were Shell with two home runs and one double; Henderson with a double, Ziskin and Wallace both with two singles. Hitting safely were Brooks and Thompson.

Pearl’s hitters include: Cailee Arender and Katlynn Harvey, both with doubles; and Jade Lockley, Madison Price, and Jesika Patterson all with singles.

Motley pitched the game. She had one strikeout and one walk.

Cailee Arender pitched the game for Pearl. She had one recorded strikeout and four walks.

The Lady Panthers take on North Pike Thursday in another home game.

In JV action, the BHS junior varsity squad took an early lead in the game, but the Lady Pirates were able to pull out the win.

Brookhaven was led at the plate by Kyla Henderson with two doubles. Meg Foster provided a double and a single and Jashunna Finley had a double. Hitting safely were Jadeyn Fuller and Ce’Aira Henderson.

WESSON – The Wesson Lady Cobras continued their dominance in Region 7-2A softball action Tuesday night with a 11-1 win... read more