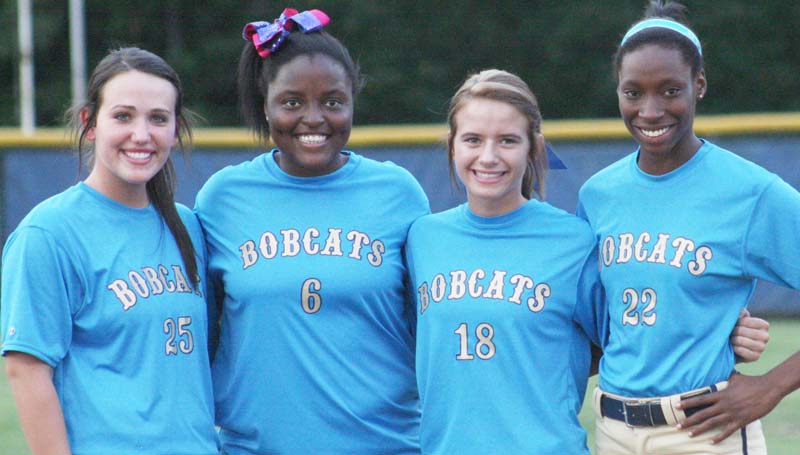 “This was a good game for both teams,” said BC coach Scott Leggett. “The girls played really well defensively. We did not have any let-down moments during the game. Overall, I was proud for our seniors. This was a big win for them on Senior Night.”

The Lady Cats (15-4, 2-0) will resume action Thursday as they host the Ethel Tigers. Junior varsity action begins at 5 p.m., followed by the varsity contest at 6:15 p.m.

The Lady Bears (17-4, 2-0) will have the rest of the week off before returning to action Saturday as they travel to Monticello to participate in Lawrence County’s softball tournament. The Lady Bears battle Lawrence County at 9 a.m., Mendenhall at 12 p.m. and Raleigh at 3 p.m.

The Lady Cats quickly jumped on the Lady Bears to grab an early 2-0 lead.

After a strong defensive second inning, the Lady Bears’ offense managed to get rolling as they plated five runs, led by Megan Gerald’s grand slam home run in the top of the third inning.

In the bottom half of the inning, the Lady Cats answered West Lincoln’s challenge by rallying back to tie the contest at 5-5.

Both teams continued the offensive slugfest in the fourth inning as each team scored three runs to keep the game at 8-8.

After a scoreless fifth inning, the Lady Cats put together a strong offensive surge in the bottom of the sixth to score three runs to take a 11-8 lead.

In the top of the seventh, West Lincoln threatened to rally back as they loaded the bases, but failed to push across any runs as Bogue Chitto secured the final out.

Brooke Myers was the winning pitcher for the Lady Cats with no strikeouts and no walks.

Makennah Redd absorbed the setback on the mound for West Lincoln with no strikeouts and four walks.

“Both teams hit the ball really well tonight,” said West Lincoln coach Andrew Redd. “Our defense wasn’t very sharp tonight as we usually are. The girls fought hard until the end, but we came up a little short at the end.”

Skylar Hall pitched the win for West Lincoln with no strikeouts and one walk.

T’Asia Black, Payton Barron, Kylie Chapman and Rainie Welch were the top hitters for BC with a single each.