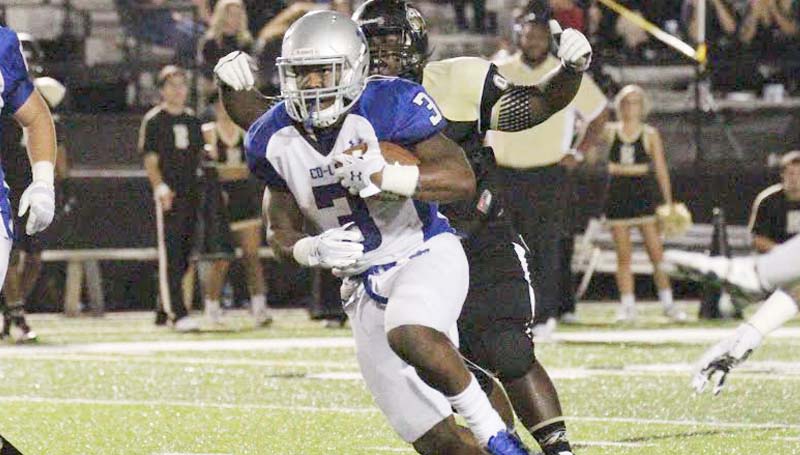 Co-Lin Media / Natalie Davis / Co-Lin running back Lakedric Lee (3) and the No. 1 ranked Wolves host the Pearl River Wildcats for homecoming Saturday at Stone Stadium. Kick off is at 2:30 p.m.

WESSON – The Co-Lin Wolfpack will celebrate homecoming 2015 as they take on the Pearl River Wildcats on Saturday at 2:30 p.m. in Stone Stadium. With the 31-28 victory over the No. 19 ranked East Central Warriors last week, the Wolfpack continue to hold on to the No. 1 ranking in NJCAA poll for the fourth consecutive week.

The Wildcats (1-4, 0-2), under the direction of third year head coach William Jones, will be entering the South Division match-up after falling to the Southwest Bears 31-27 at home last week. The Wildcats held a late lead over the Bears after coming back from an early deficit that saw them come roaring back with the aid of kickoff return for a touchdown by their special teams unit. But a late 2-yard touchdown run by Southwest running back Justin Blue sealed the Wildcats fate with under a minute remaining in the contest.

Last season, the Wolfpack traveled to Poplarville defeating the Wildcats 20-9 behind a stellar performance their defense holding Pearl River’s offense scoreless for three quarters. Pearl River holds a 42-37-3 record all-time against the Wolfpack.

As it has been since the start of the season for Co-Lin, the Wolfpack offense was led by sophomore running back Lakedric Lee who carried the ball 21 times for 85 yards and two touchdowns brining his season totals to almost 500 yards and eight touchdowns. Lee is two-yards shy of averaging 100 yards rushing a game. Freshman quarterback Garrett Kruzcek was consistent again for Wolfpack having one of the most efficient quarterback performances in Co-Lin history, completing 25-of-28 passes, including a 20-yard touchdown strike wide receiver Dayall Harris for Co-Lin’s final score. It was Harris’ first touchdown of the season.

On the defensive side of the ball, sophomore corner back Lashard Durr scooped up a fumble and ran it 78-yards for a touchdown late in the second quarter. Freshman linebacker Michael Graham put forth his best effort of the season against the Warriors, leading the Wolfpack with a career-high eight tackles. Lineback Zach Williams and freshman defensive back Josh Applewhite both tallied seven tackles apiece.

Kickoff is set for 2:30 p.m. Watch live at www.colinathletics.com or listen on WMJU 104.3 FM in Brookhaven.