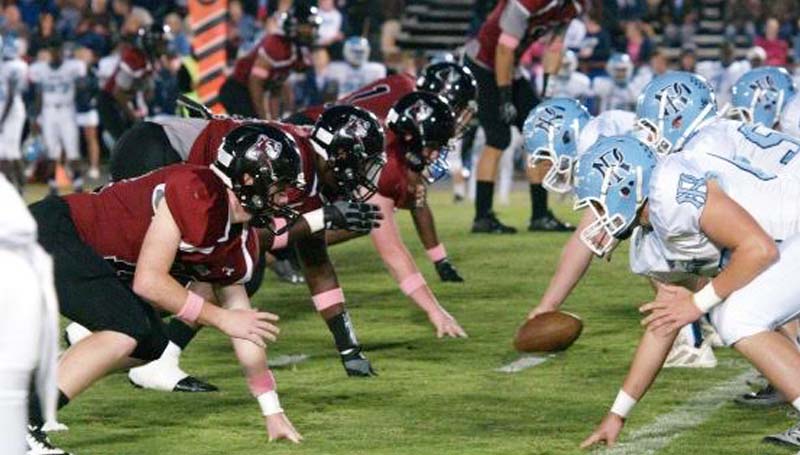 MONTICELLO – Lawrence County overwhelmed North Pike 42-14 in a key Division 7-4A football matchup Friday night at Lawrence County High School. Quitten Brown rushed for 181 yards and three touchdowns, and quarterback Charl’Tez Nunnery passed for two touchdowns and ran for another as LCHS rolled to a 42-0 lead.

With the win, Jaymie Palmer’s Cougars improved to 6-1 on the season, and start division play at 1-0. North Pike, coached by Chris Smith, fell to 4-2 overall and 0-1 in the division.

“We had a great night,” said Palmer, who is in his second year at the helm of his alma mater. “I think this is the best win we’ve had since I’ve been here. We had a good night offensively, and Coach (Justin) Sawyer and his guys did a tremendous job on the defensive side. North Pike has tremendous weapons, but our guys got after them pretty well tonight.”

Palmer’s assessment of his team’s defensive effort was an understatement. North Pike entered the game averaging 47 points per game, having scored a total of 132 points in the Jaguars’ previous two games. Lawrence County had North Pike shut out until Nakia Trotter scored on a 2-yard run with 8:19 left in the game. The Jaguars’ final score came with 32 seconds left, culminating a drive that came against LCHS reserves.

An errant shotgun snap, on the fourth play from scrimmage, was North Pike’s first miscue of the night. Lawrence County’s Will Thurman recovered. Two plays later, Quitten Brown went 34 yards for a touchdown. Josh Stephens kicked the first of six extra points to give LCHS a 7-0 lead.

After a lengthy North Pike possession ended in a punt, the Cougars quickly went 81 yards in five plays, the final 50 yards coming on Brown’s second TD of the night. The Lawrence County defense followed that by stopping North Pike on downs at the LCHS 30-yard line. That set up a 10-play drive that culminated in Brown’s eight-yard touchdown run.

Two key plays set up that third score. On a third-and-6 play, Nunnery passed to T-Tez Cole for 13 yards to keep the drive alive. Later, with the Cougars facing fourth-and-11 at the North Pike 36, Lawrence County guard Blake Williams ran for 23 yards on a “fumble-roosky” play that worked to perfection. Brown’s third touchdown gave the junior running back an incredible 21 TDs in seven games. It was 21-0.

Trailing 21-0, North Pike opted to go for it on a fourth-and-four play from the Jaguars’ own 35-yard line. The Jaguars were stopped cold. Six plays later, Nunnery flipped a two-yard scoring pass to Cole, and it was 28-0.

After the LCHS defense again stopped North Pike on downs, the Cougars tacked on their final first-half score with 16 seconds left in the half. That came on a 5-yard pass from Nunnery to Marcus Atterberry. That same combination hooked up on a 21-yard gain moments earlier. The score was 35-0. For all intents and purposes, the game was over.

To North Pike’s credit, the Jaguars came out and played hard in the second half. The third period was scoreless. On the first play of the fourth quarter, T-Tez Cole carried for 38 yards, down to the North Pike one-yard line. Nunnery sneaked across on the next play, giving Lawrence County a 42-0 lead.

With 8:19 left in the game, North Pike got on the scoreboard with a Nakia Trotter 2-yard touchdown run. Trent Coleman kicked the extra point. With 32 seconds left in the game, Taz Fountain threw a 2-yard scoring pass to Javian Jackson for the final points of the night.

Nakia Trotter led North Pike with 146 yards on 19 carries. Dynamic senior quarterback Juwan Adams was held in check by the Cougar defense. He gained just eight rushing yards on eight attempts, with one of those being a sack that lost 22 yards. Adams completed 20 of 40 passes for 166 yards. Javian Jackson hauled in 12 passes for 93 yards and a touchdown. Dylan Adams had four catches for 52 yards.

Cole, a senior inside linebacker, led the Lawrence County defense with an unofficial 13 tackles. Will Thurman and Marcus Kees had fumble recoveries, and Thurman had a sack of Adams that lost 22 yards. The LCHS pass defense was outstanding, limiting North Pike’s vaunted air attack to less than four yards per pass attempt.