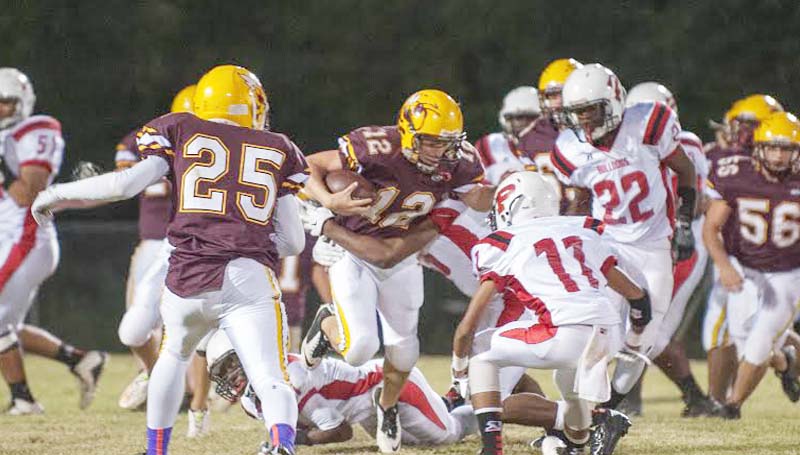 The Prentiss Bulldogs dominated the Jackets to collect a 48-8 Region 7-2A victory on Enterprise’s homecoming Friday at Harry Cole Field.

“This was a good game for my guys,” said Prentiss coach Tim McNair. “Enterprise has a very good team, and they fought hard until the very end. Overall, I am very proud of my guys, but we still have several things that we need to work on to get better.”

The Bulldogs overpowered the Jackets with their speed and size to score 42 unanswered points through three quarters of action.

In the final period of action, Prentiss punched in their final touchdown of the night to secure a 48-0 lead early in the fourth quarter. Through the rest of the period, the Jackets’ defense rose to the challenge and kept the Bulldogs from scoring for the rest of the game.

Enterprise managed to get its offense clicking towards the end of the game, as the Jackets began moving the ball down the field. With time running down, Enterprise spoiled Prentiss’ shutout attempt as sophomore running back Tanner Waldrop scored on a 35-yard touchdown run. Trestin Grenn cashed in the two-point conversion for the Jackets as Prentiss won 48-8.

“Prentiss has a very good team,” said Enterprise coach Brooks Burns. “This was a very tough game for my guys, but everyone played hard until the end. Overall, I was pleased with our effort, but now we must start getting ready for our next opponent.”

Offensively, Tanner Waldrop directed the Jackets with 18 rushes for 134 yards. He also ran back two kickoff returns for a total of 37 yards. Braxton Thompson contributed 34 yards rushing on seven carries.

BASSFIELD – The West Lincoln Bears were dominated by the defending Class 2A state champion Bassfield Yellowjackets in a 59-6... read more