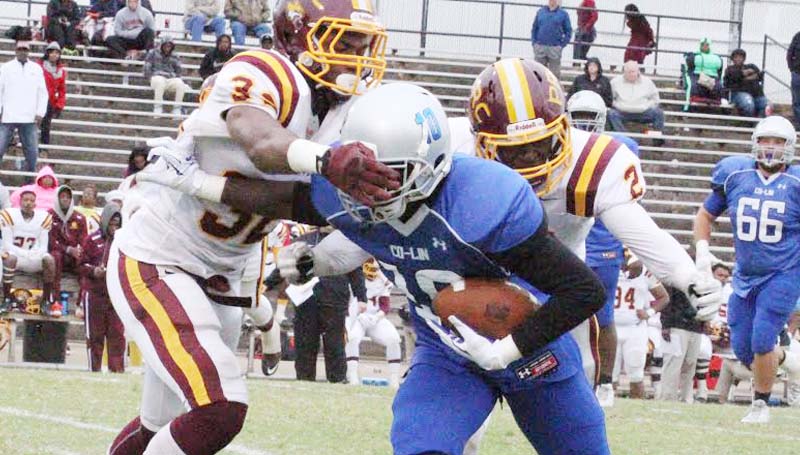 WESSON – The Pearl River Wildcats spoiled Co-Lin’s homecoming upsetting the No. 1 ranked Wolfpack 17-9 in a South Division contest today. The Wolfpack fall to 5-1 overall and 2-1 in the South Division.

“We didn’t play our best today,” said Co-Lin head coach Glenn Davis. “I have to give Pearl River credit. The first half I thought we went through the motions. I thought we did some things better in the second half. Defensively, I thought we played well enough to give ourselves a chance to win. We just didn’t score touchdowns when we had the opportunities. We had three turnovers and it wasn’t one of our better ball games.”

The Wolfpack took a 3-0 lead at the 5:11 mark in the first quarter on a Greg Nickles 42-yard field goal. The Wildcats capitalized on a Co-Lin turnover as running back Carlos Ransburgh rambled in from 2-yards out. Brennan O’Keefe’s PAT gave Pearl River a 7-3 lead with 1:19 left in the quarter.

Pearl River would ice the game with 1:57 remaining when Tyler Jack would intercept a Garrett Kruzcek pass and return it 45 yards for a touchdown.

Kruzcek finished the game 23-of-45 for 221 yards. Lakedric Lee led the Wolfpack rushing attack with 24 carries for 115 yards. Dayall Harris had 6 catches for 58 yards. Julius Craft had 4 receptions for 54 yards.

Co-Lin travels to Raymond to face the Hinds Eagles on Thursday. Kickoff is set for 6:30 p.m. Listen live at www.colinathletics.com or WMJU 104.3 FM.