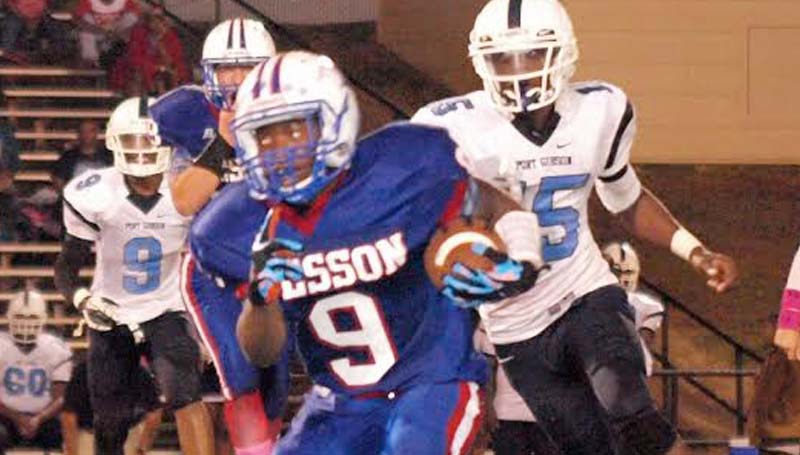 “This was a very disappointing loss for our team,” said Wesson coach Ronald Greer. “Turnovers killed us. Regardless of your opponent, if you turn the ball over seven times it makes it virtually impossible to win the game. We have to take care of the ball to give ourselves a chance to win ballgames.”

In the opening quarter, the Cobras struggled to control the ball on offense, due to the rain, but managed to worked the ball down into Port Gibson territory with three first downs to make it to the two-yard line. Wesson failed to score on a fourth down attempt, when Jermaine James tried to punch the ball into the end zone.

After the turnover on downs, Wesson held the Blue Wave offense to six yards of rushing with tackles by Brian Thomas, Tre Glasper and Davion Frye, which resulted in the Cobras taking over on the Blue Wave 38-yard line after returning the punt.

Wesson would fumble the ball on its first offensive drive allowing Port Gibson to take over, but the Cobras would get the ball back as Matthew Craft recovered a Port Gibson fumble as the first period ended scoreless.

After the fumble recovery, the Cobras moved the ball to the Blue Waves 17-yard line at the start of the second, only to fumble the ball again. Port Gibson took possession and held the ball through three first downs.

Wesson defender Tre Glasper would make a huge stop on the next play when he tackled receiver Jonte Demby on third down to spoil Port Gibson’s scoring drive to end the first half scoreless.

In the second half, the Cobras received the ball, but ended up fumbling again which allowed the Blue Waves to take over on Wesson’s 33-yard line. The Blue Waves took advantage of the situation as Jonte Demby scored on a 17-yard run and the extra point was good to give Port Gibson a 7-0 lead in the third quarter.

The Cobras would fumble the ball again on their next offensive drive, but Demarcus Smith would get the ball back for Wesson after recovering a Blue Waves fumble.

Port Gibson’s Demby would later spoil Wesson’s scoring drive in the redzone with a interception to end the third quarter.

In the final period, the Cobras woes continued as they fumbled the ball again but managed to keep the Blue Waves from scoring for the remainder of the game.

Offensively, Wesson finish with 46 rushes for 186 yards. Peyton Burns was 1-for-3 for 51 yards in passing for a total of 237 offensive yards.

Cornelius Barlow was the leading rusher for the Cobras with eight carries for 82 yards. Jamarcus Patterson had 15 carries for 55 yards. Barlow finished with 169 all-purpose yards.

Defensively, Davion Frye and Demarcus Smith were the leaders with seven tackles each. Bobby Pritchard contributed five tackles and Trey Glasper had four tackles. Wesson had seven turnovers, six fumbles and one interception.

Port Gibson finished with 32 rushes for 43 yards and was 6-for-12 in passing for 89 yards for a grand total of 132 yards. Jonte Dembe was the top rusher with four carries for 25 yards and one touchdown. Fabian Gilmore led all receivers with three catches for 46 yards.

Daily Leader / Sherylyn Evans / Brookhaven Academy quarterback Madison Smith (10) runs to the outside to get away from... read more