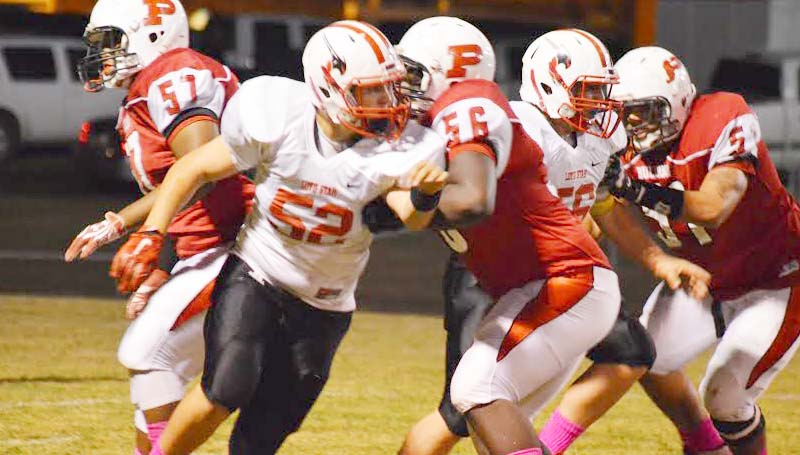 PRENTISS – The Prentiss Bulldogs celebrated homecoming Friday night with a 58-20 win over the Loyd Star Hornets in Region 7-2A football action.

“This was a good win for our guys, ” said Prentiss coach Tim McNair. “Overall, I was very pleased with my team’s effort, everyone came out and played hard.”

Prentiss managed to wear down Loyd Star’s defense to score the first points of the night on a 30-yard pass from Jalen Madison to Tim McNair Jr. The Bulldogs were successful on the two-point conversion attempt to secure a 8-0 lead.

The Hornets quickly answered when James Beard returned the ensuing kickoff for a touchdown. The Hornets was successful on their two-point conversion attempt to tie the game at 8-8.

Prentiss continued to wear down the Hornets’ defense with its passing attack as Jalen Madison threw for his second touchdown of the game on 30-yard strike to McNair Jr., but the Bulldogs failed on their second attempt for the two-point conversion. Prentiss led 14-8 with 6:41 remaining.

On Loyd Star’s next offensive drive, quarterback Michael Harvey threw an interception that was returned 50 yards for a touchdown, and the Bulldogs increased their lead to 22-8 after scoring the two-point conversion to end the first.

In the second quarter, Prentiss continued to spread the field with its passing attack and scored another touchdown when Jalen Madison ran in a 25-yard score for his third touchdown of the night to extend the Bulldogs lead to 30-8.

With 5:45 left in the second quarter, Loyd Star’s Harvey managed to break free to sprint in a 20-yard touchdown to cut into the Bulldogs’ lead at 30-14.

With 13 seconds left in the first half, the Hornets made a costly mistake on the three-yard line, which led to Prentiss finding the end zone for the final score of the half. Isaiah Gatlin ran the ball in to give the Bulldogs a 38-14 lead at halftime.

In the third period, Jalen Madison scored another touchdown on a 15-yard run and the Bulldogs punched in another two-point conversion to add to their lead at 46-14.

With 5:26 remaining in the third, Loyd Star found the end zone with a 10-yard strike by Parker Flowers to cut into Prentiss’s lead at 46-20.

The Bulldogs finished off the third quarter with another touchdown when Madison threw a 35-yard pass to McNair. Prentiss led 52-20.

In the final period, Prentiss would score its final touchdown of the game on a 40-yard run by Radonte Womack with 3:30 left as the Bulldogs held on to clinch a 58-20 victory.

“Prentiss has a good team,” said Loyd Star coach Adam Cook. “I was very impressed with the way my guys played tonight. The guys are supporting each other and coming together as a team.”

James Beard had a 85-yard kick off return for a touchdown.