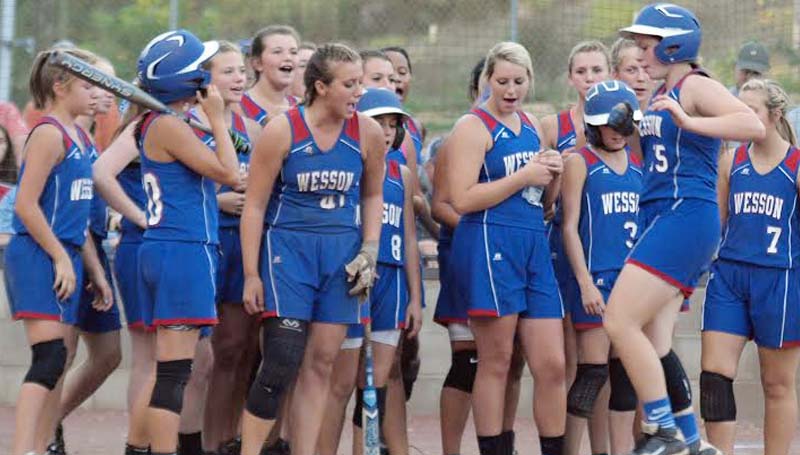 Daily Leader / Tracy Fischer / Wesson’s Katie Westbrook is greeted at home plate by her teammates after hitting a home run Tuesday against Morton in Class 3A state softball playoffs.

WESSON – The Wesson Lady Cobras defeated the Morton Lady Panthers Tuesday night in a best-of-three series in the first round of the Class 3A state playoffs.

The Lady Cobras hammered Morton 13-3 in the first game and won the second game 17-5 to secure the sweep.

The Lady Cobras will advance to the second round to play against the Lady Tornadoes in Philadelphia on Saturday.

In Game One, both teams scored two runs in the first inning, before the Lady Cobras managed to warm up offensively and put together a string of hits to outscore the Lady Panthers 11-1 to win the game in a six-inning contest.

Brooke Jones, Kaitlyn Smith and Katie Westbrook led the Lady Cobras at the plate as each hit home runs in the sixth inning. Jones also contributed a double and a single to direct Wesson’s offensive surge.

Cheyenne Gladden hit a double to end the game in the bottom of the sixth inning.

Harmoni Ashley was the Lady Cobras’ top defensive player with seven outs at first base. A’rie Douglas had five outs at second base.

For the Lady Panthers, Baley McCurdy was the top hitter with three singles. Brandy Watson was the leader on defense with four outs in right field.

In Game Two, the Lady Cobras dominated the Lady Panthers in the third inning with a 12-run surge after a slow scoreless start in the first two innings to collect the win in a five-inning contest.

Harmoni Ashley led the Lady Cobras’ defense with four outs at first base.

Vertreunna Harris and Ramiah Johnson were the top hitters for the Lady Panthers with a double and a single each. Harris led Morton’s defense with one assist and three outs at shortstop.

MONTICELLO-The Lawrence County Lady Cougars blew past Florence in the opening round of the state 4A slow-pitch softball playoffs. LCHS... read more