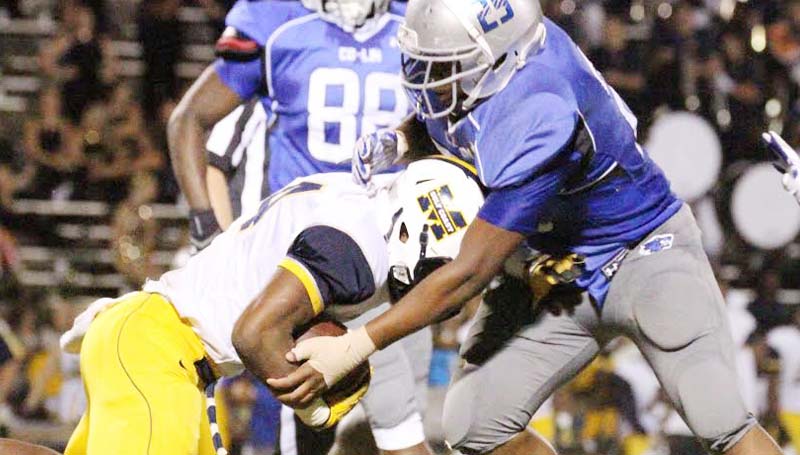 WESSON – The Co-Lin defense stopped Gulf Coast at the goal line on the potential game-winning 2-point conversion to upset the No. 7 ranked Bulldogs 31-30 in overtime Thursday at Stone Stadium.

The Wolfpack got the first possession in the overtime period. Quarterback Garrett Kruzcek hit tight end Matias Robinson on a 12-yard touchdown pass. Greg Nickles nailed the PAT to give the Wolfpack a 31-24 lead.

On Gulf Coast’s possession, Tevaris McCormick scored on a 10-yard run. The Bulldogs lined up to kick the potential the extra point, the Wolfpack called a time out. When play resumed, Co-Lin was flagged for too many men on the field moving the ball half the distance to the goal. Gulf Coast head coach Chad Huff called a time out and decided to go for the win on a two-point conversion. Quarterback A.J. Elderly handed the ball off to Ge’Vonte Jones who tried to run the ball up the middle, but Co-Lin linebacker Colton Magee and the Wolfpack defense stopped up the middle giving the Wolfpack the win.

“Our kids made a great play at the end and they got penetration,” Co-Lin head coach Glenn Davis said. “We got to the running back before he could jump over the top. Our kids are 2-0 in overtime and they know what to expect.”

With 2:42 left in the fourth quarter, Co-Lin took a 24-17 lead when Kruzcek hit wide receiver Dayall Harris on a 12-yard strike. Nickles extra point was good.

Co-Lin was penalized on the ensuing kickoff for unsportsmanlike conduct giving the Bulldogs excellent field position. Gulf Coast drove the ball 53 yards in seven plays with Jones plunging into the end zone from the 1-yard line with a minute left in regulation. The Joshua Rowland PAT was good and the Bulldogs tied the game at 24-all to send the game into overtime.

“I thought our kids played extremely hard,” said Davis. “I can’t give them enough credit for everything they’ve been through this season.”

Gulf Coast took the early lead when Erdley hit McCormick with a 33-yard touchdown pass at the 10:12 mark in the first quarter. Rowland’s PAT was good giving the Bulldogs a 7-0 lead.

Co-Lin responded when Kruzcek hit Harris on a touchdown pass with 6:16 left in the quarter. Nickles hit the PAT to tie the game at 7-7.

The Bulldogs took a 14-7 lead into halftime as Erdley found McCormick on a 41-yard touchdown pass.

On the first play of Co-Lin’s next possession, running back Ladarius Galloway sprinted 75-yards through the middle of the Bulldog defense for a touchdown. The Nickles PAT tied the game at 17-17 with 11:24 remaining.

Kruzcek was 19-of-32 for 228 yards, three touchdowns and one interception. Harris led the Wolfpack receivers with 10 catches for 125 yards and two touchdowns. Galloway led the running attack with 16 carries for 130 yards and one touchdown.

For Gulf Coast, Erdely completed 7-of-18 passes for 153 yards and two touchdowns and an interception. Chris Robinson led the way with 88 yards rushing on 14 carries. Jones had 97 yards on 25 carries.

The Bulldogs (6-2, 5-1) have already clinched the top seed out of the MACJC South Division.

With the win Co-Lin (4-4, 3-2) still has a chance to get into the playoffs as the No. 2 seed in the South, but will need some help for Southwest. The Wolfpack must beat Jones next week in Ellisville and Southwest must defeat East Central on Saturday and Hinds next Thursday.

Kickoff for Thursday’s game is at 7 p.m. Watch live at www.colinathletics.com or listen on WMJU 104.3 FM in Brookhaven.