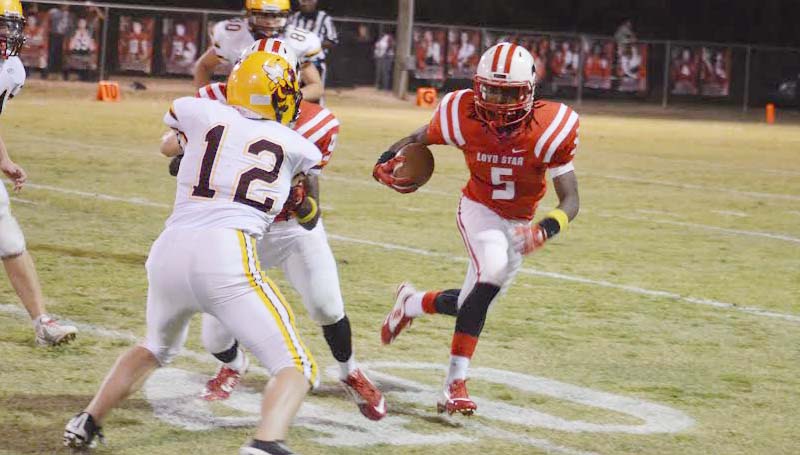 Daily Leader / Chris King / Loyd Star’s freshman running back James Beard (5) sprint to the outside for a touchdown as Enterprise’s defender Tanner Waldrop (12) tries to deny the attempt Friday night.

Loyd Star celebrated 50 years of high school football Friday night with a 54-32, Region 7-2A win over the Enterprise Yellow Jackets in the annual Sting Bowl.

“It is good to get the win,” said Loyd Star coach Adam Cook. “I am proud of my guys for stepping up and playing their hearts out. I would like to thank all the fans that came out to show their support and help us celebrate our 50th year anniversary.”

With 5:00 left in the first quarter, Enterprise got on the board first with a 25-yard run from quarterback Zack Hodges, but the Jackets failed to convert on the two-point conversion try.

Loyd Star would later answer Enterprise’s challenge when Parker Flowers sprinted in a 58-yard touchdown to tie the game up at 6-6. Loyd Star failed on their two-point conversion attempt to end the first quarter. 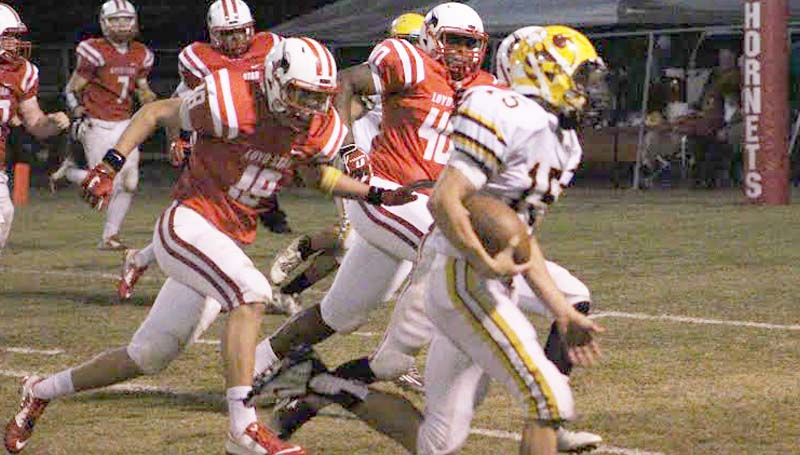 In the second, Loyd Star punched in the only score before heading into halftime when Blake Ramsey scored on a three-yard run with 9:35 left. The Hornets were successful on their second two-point conversion attempt and Loyd Star took a 14-6 lead into halftime.

In the third quarter, Loyd Star found its offensive rhythm as Michael Harvey connected with James Beard for a 20-yard touchdown strike with 9:06 remaining to increase their lead to 22-6 after punching in the two-point conversion.

After a big defensive stop, the Hornets’ offense would continue to roll as Flowers ran in a 27-yard touchdown and Loyd Star successfully ran in the two-point conversion to push their lead to 30-6.

With 4:15 remaining in third, Enterprise managed to break up Loyd Star’s offensive explosion when Hodges connected with Tanner Waldrop for a 45-yard touchdown strike. Hodges ran in the two-point conversion to cut into the Hornets’ lead at 30-14.

Loyd Star would answer with a score of their own when Patrick Price cashed in a 41-yard rushing touchdown. The Hornets would run in the two-point conversion and Loyd Star led 38-14 after three quarters.

The Hornets would respond when Flowers cashed in his third touchdown of the night on a 14-yard run.

Enterprise would fight to keep the game close – Hodges connected with Drake Allen on a 16-yard passing touchdown. The Hornets led 46-32.

The Hornets would score their final touchdown of the night on Price’s 14-yard run. Loyd Star successfully converted its final two-point conversion to win 54-32.

“My guys played hard, but we beat ourselves on offense and we gave up too many plays on defense,” said Enterprise coach Brooks Burns. “Loyd Star made the plays that they needed to win the game.”

Offensively, Flowers was the leader for the Hornets with 152 yards rushing on 14 carries and had three touchdowns. Flowers also caught a pass for 21 yards. Price contributed four rushes for 63 yards and a touchdown. Ramsey had 52 yards on nine carries and had a touchdown. Anfernee Claire rushed six times for 40 yards. Konner Allen, Claire, Flowers and Ramsey ran in a two-conversion each.

Michael Harvey completed 8-of-12 passes for 138 yards, one touchdown and a interception. James Beard was top the receiver with seven catches for 117 yards and a touchdown.

Hodges completed two passes for 65 yards and rushed for 83 yards on eight carries.

Loyd Star honored the class of 1965 Friday night by having each member walk out as honorary captains for the coin toss. During halftime the Class of 65, along with other classes that played football at Loyd Star during the past 50 years, were recognized.