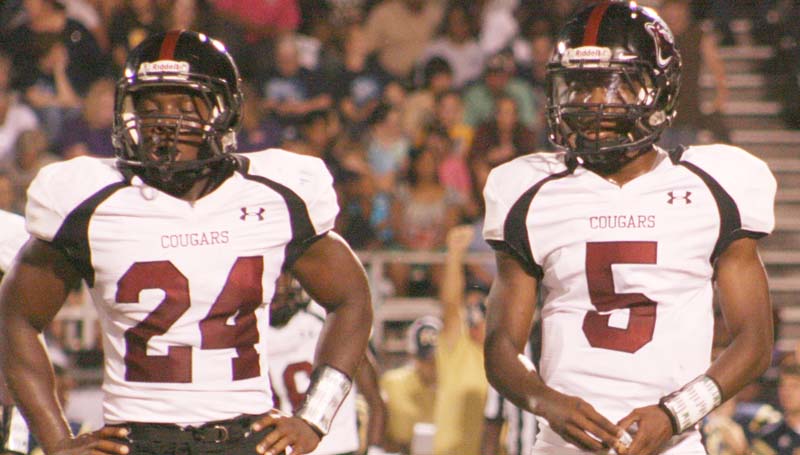 MAGNOLIA – The Lawrence County Cougars rolled to their seventh straight football victory on Friday, beating the South Pike Eagles 42-12. With the win, Lawrence County took complete control of the Division 6-4A title race.

Quitten Brown rushed for 140 yards and two touchdowns, and Charl’Tez Nunnery rushed for 100 yards and passed for 173 more, as the Cougars fought off an early challenge from the homestanding Eagles.

With the win, Jaymie Palmer’s Cougars improved to 8-1 overall, and 3-0 in Division 6-4A play. South Pike, under coach John Culpepper, fell to 2-6 overall, and 1-2 in division play.

“We had a decent night,” said Palmer. “It was a good win to get. I didn’t think we were as sharp as we had been the last few weeks, and South Pike made some plays, but we’re proud to be 8-1, and we’re in a good position in the division.”

Underdog South Pike made a fight of it, especially in the first half. Thanks mostly to a 60-yard pass from William Carter to Jamarius Lewis, the Eagles took the opening kickoff and moved deep into LCHS territory before being stopped on downs.

Lawrence County needed just five offensive plays to jump on top, with Nunnery flipping a forward lateral to a streaking A.J. McLaurin, who raced 32 yards for a touchdown. Officially, it went as a forward pass. Josh Stephens then kicked the first of six straight extra points. The Cougars led 7-0.

Late in the first quarter, South Pike bounced back. A 50-yard pass from Bobbieal Ellzey to Roctavis Magee set up a one-yard touchdown plunge by Marc Varnado. A two-point attempt failed, making it a 7-6 game. Varnado had a big night for the Eagles, rushing for 168 yards on 20 carries.

Midway through the second quarter, Lawrence County’s Nunnery hit Marcus Atterberry for 45 yards, down to the South Pike five-yard line. That set up the first score of the night for Brown, a five-yard run. It was 14-6, with South Pike making the favored Cougars earn every bit of it.

Late in the first half, after stopping South Pike on downs, the Cougars drove 68 yards in nine plays. A successful fake punt kept the possession going, and quarterback Nunnery scored on a dandy 21-yard run. LCHS led 21-6 at the half.

Brown’s 47-yard kickoff return got the Cougars up and going to start the second half. On the third play of the third period, he raced 20 yards for a touchdown, and Lawrence County was very much in control at 28-6.

With 5:11 left in the third quarter, Lawrence County’s Marcus Kees broke through and blocked a Justin Klunk punt in the South Pike end zone. Quitten Brown pounced on the ball, scoring his 27th touchdown of the season, and making it a 35-6 game.

Late in the third quarter, South Pike twice got deep into LCHS territory, only to be stopped on downs. The Eagles made it to the seven-yard line on one possession, quickly forced a Lawrence County punt, and drove down to the six-yard line. Each time, the Cougar defense prevailed.

Lawrence County’s final score came midway through the fourth quarter, when T-Tez Cole scored on a one-yard plunge. A 33-yard screen pass to Brown helped set it up. The Cougars led 42-6 at that point. In the waning moments, South Pike drove the length of the field against LCHS reserves. Ellzey scored on an eight-yard run. Ellzey rushed for 69 yards on the night.

Lawrence County will try to keep its magical season going Friday when the Cougars travel to Richland for the first-ever football meeting between the two schools. South Pike will travel to Florence.