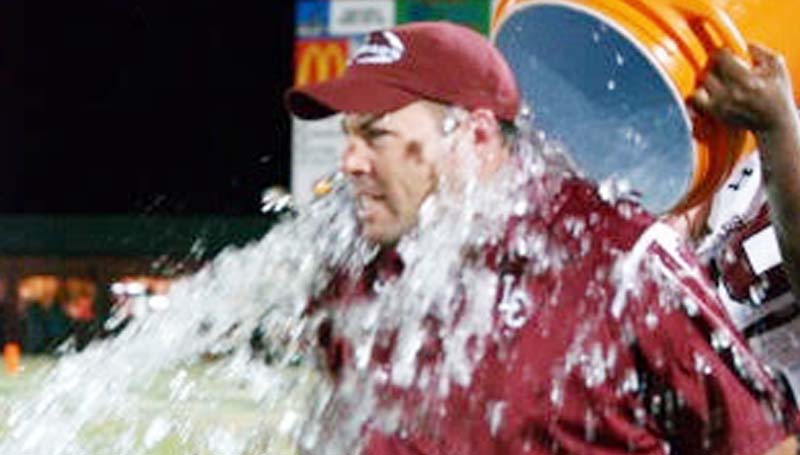 RICHLAND – The Lawrence County Cougars rolled over the Richland Rangers 49-0 on Friday night, clinching the Region 6-4A championship in the process.

LCHS jumped to a 35-0 halftime, and scored two quick touchdowns at the start of the second half. After that, the clock ran almost non-stop as Lawrence County fans began celebrating the division title.

“It was a good night, in what’s been a great season,” said second-year Cougar coach Jaymie Palmer. “I’m proud of our kids, and I’m proud for our kids. That said, we’ve still got plenty of work ahead of us.”

With the win, Palmer’s Cougars improved to 9-1 overall, and 4-0 in Region 6-4A play. Even if they lose to Florence Friday, LCHS has clinched the region title. Richland, under first-year coach Paul Burtnett, fell to 1-9 on the year.

The only gripe Palmer could have had was the first offensive series. A Quitten Brown punt return set the Cougars up at the Richland 20. The Ranger defense stuffed Lawrence County and forced a 30-yard field goal attempt, which was missed. After that, it was all LC.

After a decent Richland drive fizzled in Lawrence County territory, Nunnery immediately hit Quitten Brown for 64 yards and a touchdown, making it 14-0. Early in the second quarter, after an unsuccessful Richland fake punt, Rykendrick Harness scored the Cougars’ third touchdown on a 35-yard reverse run.

Punter Brandon Smith was Richland’s biggest weapon, kicking three times for a 53-yard average. After he pinned the Cougars back on their 12-yard line, Lawrence County drove 88 yards in 11 plays. The big play was a 39-yard pass from Nunnery to A.J. McLaurin. It set up Nunnery’s four-yard scoring run. It was 28-0 with 3 minutes left in the first half.

On Richland’s next play, an errant punt snap cost the Rangers much yardage and the football, as Marcus Kees got his second fumble recovery of the night. Three plays later, Nunnery scored his third rushing touchdown of the night, an 11-yard scamper, making it 35-0 at the half.

At the start of the second half, T-Tez Cole quickly ran the Cougars down the field, eventually scoring on a three-yard run. On Richland’s next offensive play, LCHS quarterback KeMarcus Brown scooped up a Ranger fumble and returned it seven yards for a touchdown. It was 49-0. After that, the clock only stopped for the end of the third quarter and Richland’s three timeouts.

Every Lawrence County player who dressed saw action in the game. Late in the game, the LCHS defense featured seven freshman, several of whom were making their first varsity appearance.

Lawrence County will close out its regular season Friday, hosting the Florence Eagles. Kickoff is at 7 p.m.