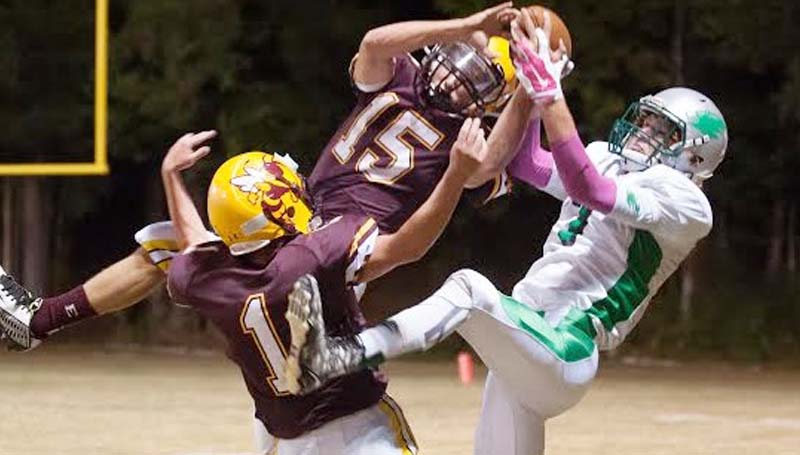 Enterprise celebrated Senior Night Friday with a huge 40-8 win over West Lincoln to stay in the hunt for the last playoff spot in Region 7-2A.

“We played a complete game,” said Enterprise coach Brooks Burns. “Coach Shane Adams, coach Tyler King, and coach Wade Boyte did a great job all week working to get our guys prepared for West Lincoln’s passing attack. We controlled both the offensive and defensive lines of scrimmage. We were sound and solid on special teams and we won the turnover battle with four interceptions.”

Tanner Waldrop returned an interception 82 yards for the first touchdown of the night with 9:43 remaining to give Enterprise the early lead. The Jackets attempted to run in the two-point conversion but failed to punch it in and Enterprise led 6-0. 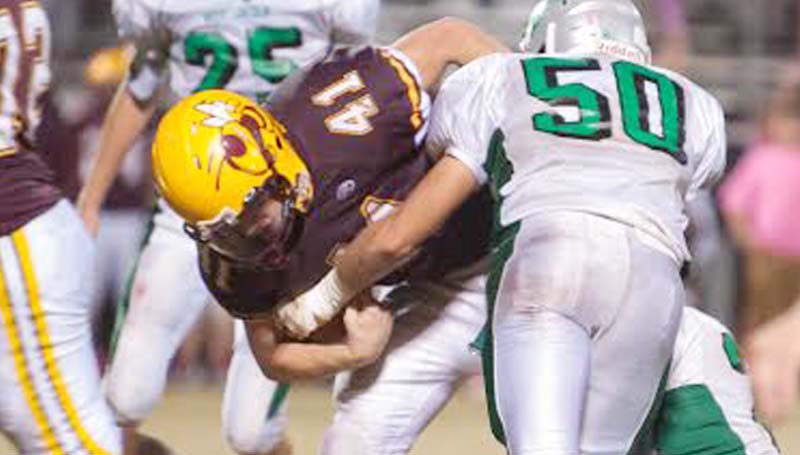 Daily Leader / Teresa Allred / Enterprise running back Braxton Thompson (41) fights to hold on to the ball as West Lincoln defender Matthew Allred (50) tries to strip it away Friday night at Harry Cole Field.

The Jackets were unstoppable as they advanced down the field to set up Braxton Thompson for a seven-yard touchdown run. Enterprise was successful on the second attempt of the two-point conversion when Zach Hodges connected with Drake Allen to give the Jackets a 14-0 lead with 1:56 left in the first quarter.

Enterprise continued to control the pace of the game in the second quarter, scoring on a Hodges’ two-yard touchdown run to increase the lead to 20-0 with 5:30 remaining in the first half.

A Devon Kirtfield interception in West Lincoln territory gave Enterprise another shot a score. Thompson punched in a 10-yard rushing touchdown to push the lead to 26-0 with 2:36 left in the third quarter.

In the final period, the Jackets continued to dominate, scoring two more touchdowns to end the game. The first touchdown was on a 16-yard run by Hodges.

Dewayne Pendleton scored Enterprise’s final touchdown on a two-yard run and Hodges punched in the two-point conversion to give the Jackets a 40-8 victory.

Offensively, the Bears finished with 209 total all-purpose yards with 14 rushes for 50 yards. Junior quarterback Nathaniel Addison completed 8-of-22 passes for 159 yards, one touchdown and four interception.

Enterprise finished with 322 yards total all-purpose yards. Braxton Thompson was the leader with 18 carries for 108 yards.

Zach Hodges completed 4-of-8 passes for 34 yards. Jontavius Smith was the top receiver with two catches for 26 yards.

“I would to say thank you to all of our fans who were faithful to make it to our games and support our kids all season,” said Burns. “I want to say a special thanks and congratulations to our seniors who stuck with us through three winless seasons and were able to go out with a win on Senior Night. They are a terrific group of young men who understand the value of hard work and dedication. I look forward to great things for all of them.”