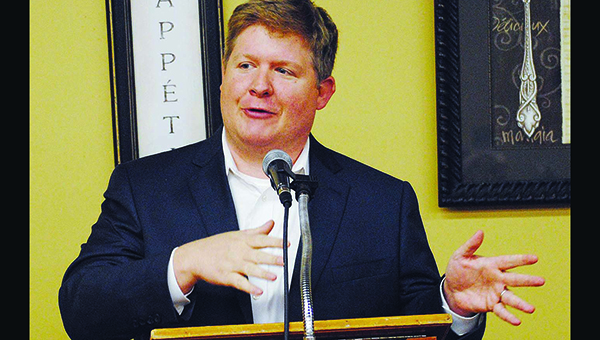 Section 201 of the Mississippi Constitution says that, “The Legislature shall, by general law, provide for the establishment, maintenance and support of free public schools upon such conditions and limitations as the Legislature may prescribe.”

Initiative 42 proposes to amend section 201. According to 42 for Better Schools, the amendment is necessary to enforce the Mississippi Adequate Education Program, a formula that determines how much money state money districts receive. The program was passed in 1997, but 42 for Better Schools said it’s only been fully funded twice since then.

The amended text under Initiative 42 says, “To protect each child’s fundamental right to educational opportunity, the State shall provide for the establishment, maintenance and support of an adequate and efficient system of free public schools. The chancery courts of this State shall have the power to enforce this section with appropriate injunctive relief.”

In response to Initiative 42, the Legislature proposed an alternative amendment that says “The Legislature shall, by general law, provide for the establishment, maintenance and support of an effective system of free public schools.”

Bryant denied that education was failing in Mississippi, saying that while 54 percent of third graders couldn’t read at a third grade level when he took office, 92 percent passed the assessment after the Legislature passed the third-grade reading gate into law.

“We passed third-grade gate,” Bryant said. “We passed charter schools. We passed a $100 million teacher pay raise. … Don’t let anyone tell you that Mississippi can’t do amazing things. If you listen to some of the folks, particularly those who are running for office, they said ‘oh, our schools are failing’, no they’re not failing. You’re going to see some information this week, I can’t share with you just now, but will amaze you about where we’re at.”

Bryant also said that unemployment has dropped from 9.5 percent to 6.1 percent, and that women are playing a large part.

“According to American Express, Mississippi is No. 5 in the nation for the growth of women-owned businesses,” he said.

“Now that’s not the narrative that you would hear on any of the national TV programs, or the New York Times, but it is the truth. Google it. So we’re doing such a great job. Becky Currie and Sen. Doty are two good examples of women in the Mississippi Legislature that have been leaders.”

Latino, a lawyer, responded to the legal aspects of Initiative 42.

Latino said Initiative 42 takes authority away from the Legislature and gives it to the courts.

“Gone is the reference to the Legislature by general law,” Latino said. “Completely deleted from Section 201 of the constitution. Gone is the reference to the Legislature being able to set conditions and limitations on the provision of free public education — completely deleted. What do they add? They added a new standard for our schools. Adequate and efficient. … If I pass out a piece of paper to every single person in this room, and said to you, ‘write down what it means to be adequate and efficient,’ there’d be some overlap, but as many people who are sitting in the chairs in this room would be how many different opinions we get on what those terms mean. This court may come back and say MAEP ain’t good enough. Throw another billion in the pot. You’re talking about 8 percent cuts, suddenly we’re up to a 20 percent cut across the board for everybody else. And that’s why the legislative budget office in their fiscal analysis of this said it’s impossible for us to predict. We don’t know what this judge is going to do.”

Latino also said that, because the amendment uses the word “State” rather than “Legislature,” it may open individual schools or teachers up for lawsuits.

Latino said people should read the amendment rather than take his word for it.

“I want you, when you step into that booth, to understand that what you do could affect the future of this state and our state’s economy for the next 40, 50 years — multiple generations,” Latino said. “And I want you to look at it closely. Read the actual amendment — not what anybody’s told you it says, not what anybody’s told you it does —read the actual amendment and see that the Legislature’s not in there. MAEP’s not in there. Funding’s not in there. We’re creating a court power that’s never existed before in the state of Mississippi.”

“It’s the supreme court that’s going to decide it, not one judge,” said Michael Rebell, executive director of the Campaign for Educational Equity and a lawyer who brought such a suit on behalf of the New York City students.

The possibility that one chancery judge could hold the fate of 490,000 Mississippi public school students in his or her hands has been a cornerstone of opponents’ attacks against Initiative 42 that will be on the Nov. 3 ballot.

Jim Keith of Ridgeland, a prominent school board attorney who supports the initiative, said the wording will only pull the state into court if funding doesn’t improve.

“The matter will never get to court if the Legislature does its job,” Keith said.

On its website, 42 for Better Schools 42 states that the increased funding it seeks would be “a phase-in using growth in the state budget, not new taxes or cuts to state agencies.”

“No legal action will be needed for full funding if the Legislature abides by the constitutional change caused by passage of Initiative 42,” the group states. “If the Legislature refuses, the Mississippi Supreme Court will have the final say in the issue, which by law must begin in Hinds County.”

A local used car lot is under investigation after a stolen vehicle was found there two days before the business’s... read more