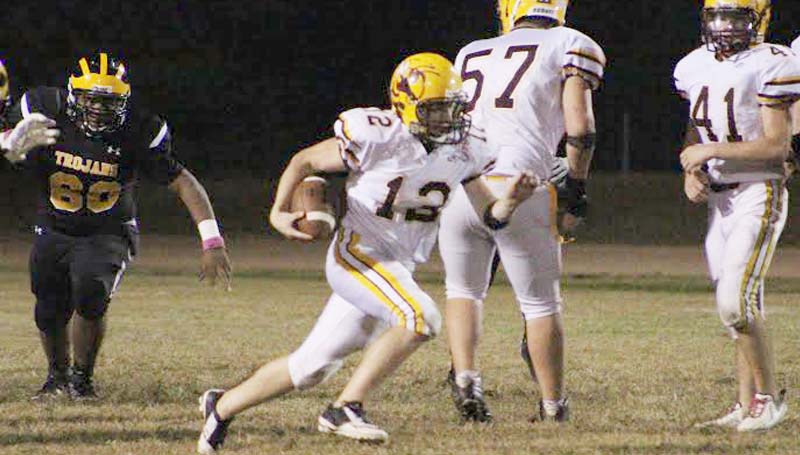 LIBERTY – The Amite County Trojans clinched the No. 2 seed in Region 7-2A with a 46-6 victory over the Enterprise Yellow Jackets Friday.

“We are excited about making the playoffs,” said Amite County coach Sedric Cane. “I am very proud of my team’s effort. My guys battled through the whole season to get to this point, but now we must get ready for the playoffs.”

With 6 minutes left in the first, the Trojans scored the first touchdown of the game on a 20-yard run by Keontae Hughes. Amite County successfully converted its first of five attempts on the two-point conversion.

After stopping the Jackets’ rushing attack on the following possession, the Trojans took over and continued to dominate the field. Amite County quickly scored on Jamarchavez Martin’s five-yard run to claim a 14-0 lead with 2:56 left.

In the second quarter, the Trojans put together a 16-0 run to increase their lead to 30-0 at halftime.

Darrion Robinson continued the offensive onslaught for the Trojans as he ran in a 20-yard rushing touchdown. D’cedrick Hurst would punch in Amite County’s last touchdown of the first half with a two-yard scramble.

In the second half, Amite County picked up where it left off and added another touchdown when Nailon Patrick ran in a five-yard score to give the Trojans a 38-0 advantage.

In the final period, Tanner Waldrop put the Jackets on the board after punching a five-yard rushing touchdown with 10:15 left. Enterprise attempted a pass for the two-point conversion but failed.

The Trojans would answer with another score of their own on the following drive when Javion Granger sprinted in a 15-yard rushing touchdown to give Amite County a 46-6 victory.

I would like to congratulate Amite County for making it to the playoffs,” said Enterprise coach Brooks Burns. “Overall, I am very proud of my guys’ efforts. They played their hearts out all year long and we had a chance to make the playoffs. I am extremely grateful for all of the hard work they put in during the season. I would also like to congratulate Tanner Waldrop for reaching 1,000 rushing yards this season.”

Dewayne Pendleton returned four kickoffs for an average of 52 yards.

The Jackets conclude their season with a 4-6 record overall and a 1-4 record in Region 7-2A. The Trojans (8-2, 4-1) will host the opening round of the Class 2A state playoffs against the Pisgah Dragons Friday. Kickoff is at 7 p.m.