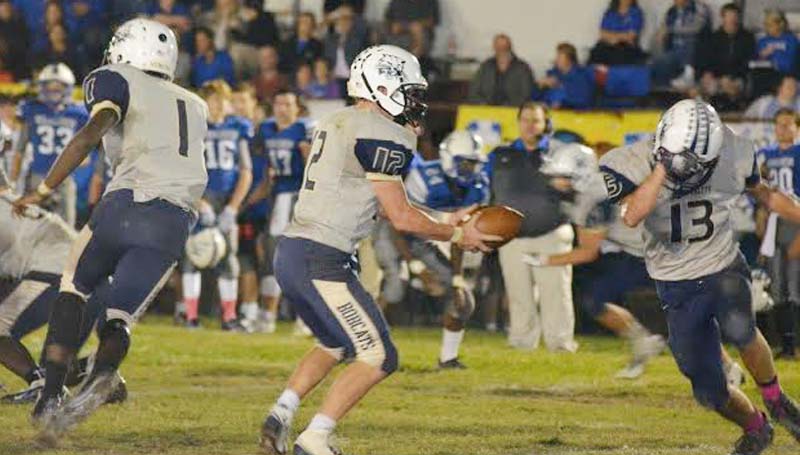 HATTIESBURG – The Sacred Heart Crusaders ended their football season with a 51-6 homecoming victory over the Bogue Chitto Bobcats Friday night in Region 4-1A action at the historical San Antonio field.

Bogue Chitto attempted an onside kick to start the game and successfully recovered it. But after a brief discussion the officials ruled that the Bobcats touched the football before it advanced 10 yards. What little momentum the play offered was quickly gone.

The Crusaders would take over and capitalize on the short field when running back William Agnew scored the first points of the game on a 37-yard rushing touchdown to give Sacred Heart at 7-0 advantage with 10:54 remaining.

A blocked BC punt led to a touchdown to give the Crusaders a 14-0 lead with 8:33 remaining in the first.

Bogue Chitto and Sacred Heart committed two turnovers each in the first. Conner Douglas recovered a fumble and Trey Nettles intercepted a pass for Bogue Chitto.

In the second period, the Crusaders continued to overpower the Bobcats as they scored 16 unanswered points to take a commanding 30-0 lead into halftime.

Junior kicker Keaton Ware started the scoring spree with a 20-yard field goal to give his team a 17-0 lead.

Paul Rowell Jr. punched in a 10-yard rushing touchdown for the Crusaders with 6 minutes left and Agnew would score his second touchdown of the first half on a seven-yard scramble with 54 seconds left.

In the second half, the offensive and turnover woes continued for the Bobcats, while the Crusaders continued to add to their lead.

McSwain scored on an eight-yard run in the third period with 5:47 left.

Ben Johnston found the endzone for the Crusaders on a four-yard run with 7:11 left in the fourth quarter.

With the Crusaders leading 51-0, the Bobcats finally managed to end Sacred Heart’s shutout late in the quarter as LaFredrick Dillon found the endzone on a 45-yard sprint. The Bobcats attempted to punch in the two-point conversion but failed.

“This was a tough loss,” said BC coach Gareth Sartin. “The kids worked hard this week to get ready for the game, but turnovers ended up hurting us. Sacred Heart did a good job taking advantage of the situation. Now, we must regroup and get ready for our last game of the season against Springfield.”

The Bobcats (1-9, 1-5) will celebrate Senior Night Friday as they battle Springfield (La.) for their last game of the season at Troy Smith Field. Kick off is at 7 p.m.

AUBURN, Ala. – With a defender draped over his back, Laquon Treadwell clutched the ball in both hands as he... read more