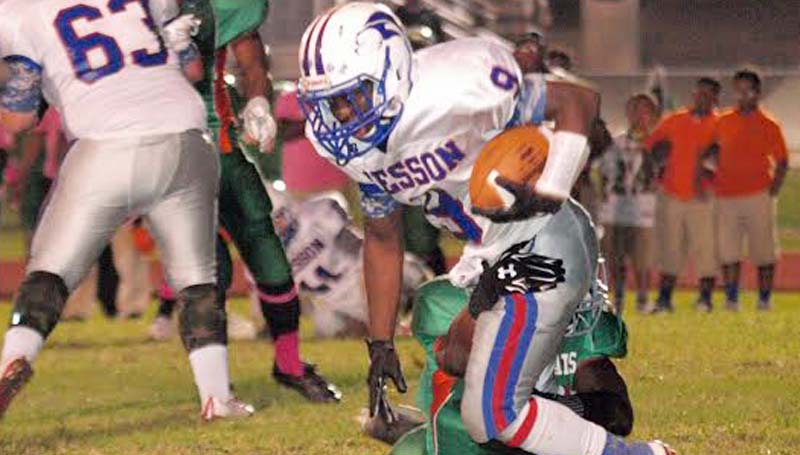 WOODVILLE – The Wesson Cobras finished the season with a disappointing 36-6 loss to the Wilkinson County Wildcats Friday night in Region 7-3A action.

“I was very proud of our guys’ effort tonight,” said Cobra coach Ronald Greer. “Turnovers have been our Achilles heel all season and tonight was no different. I would like to thank our 10 seniors for their leadership this season and wish them nothing but the best in their future endeavors.”

After a scoreless first, the Wildcats’ defense pounced on the Cobras as Anthony Juan intercepted a pass and returned it 40 yards for the touchdown. Travion Jones ran in the two-point conversion to give Wilkinson County an 8-0 lead.

On the following possession, a bad snap led to Wesson’s punter being tackled. The Wildcats took over in good scoring position, and Travion Jones would later punch in a five-yard rushing touchdown. Jaquarious Stewart ran in the two-point conversion to give Wilkinson County a 16-0 lead.

The Cobras moved into scoring position on the next possession when Cornelius Barlow took the kickoff to the Wildcats’ 8-yard line. A costly fumble denied their attempt and Wilkinson County took over.

The Wildcats collected six first downs to get the ball inside Wesson’s 4-yard line. The Cobras’ defense would hold strong and keep the Wildcats from scoring with crucial tackles by Davion Frye, Matthew Craft, Bobby Pritchard and DeMarcus Smith.

After the strong defensive stand, the offense responded with a scoring drive when Peyton Burns completed passes to Tyler Granger, Jeremiah Stapleton and a touchdown pass to Cornelius Barlow. The Cobras trailed 16-6 at halftime.

In the second half, Wilkinson County outscored Wesson 20-0, led by quarterback Desmond Hunter completing a pass to Robert Swint for a touchdown and Phillip Thompson Jr. rushing in the two-point conversion.

The Wildcats scored again on their next possession when Jaquarious Stewart caught a pass that had been tipped.

Offensively, Wesson finished with 37 rushes for 85 yards. The Cobras completed 10-of-19 passes.

Cornelius Barlow led the Cobras with six catches for 66 yards and one touchdown. He also had 90 return yards for a total of 156 all-purpose yards.