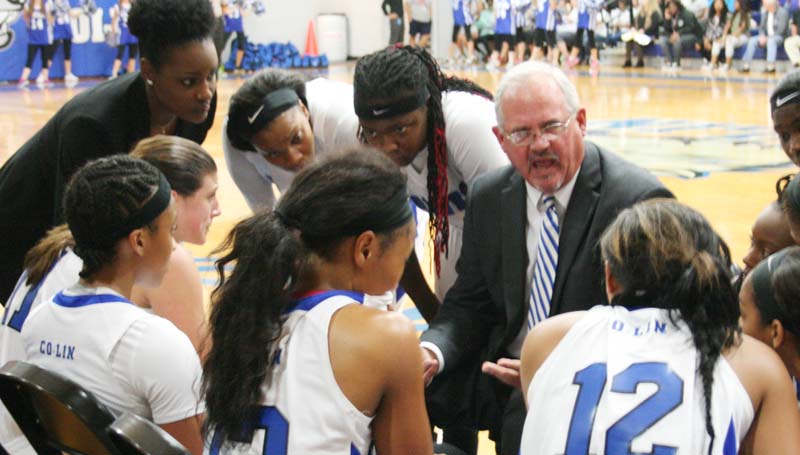 WESSON – The Co-Lin Wolves captured a split decision over the Holmes Bulldogs Monday night in their 2015-2016 season debut in JUCO basketball at Mullins Gymnasium.

The Lady Wolves (1-0) overcame a sluggish start to rally back in the final minutes to win their opener 74-68 against Holmes. In the men’s game, the Holmes Bulldogs outscored the Wolves 49-43 in the second half to prevail 82-74.

Co-Lin returns to action Thursday as it travels to Moorhead to battle the Mississippi Delta Trojans for their first road test. The women tip off at 6 p.m. with the men’s game to follow.

The Co-Lin Lady Wolves (1-0) came out strong in the fourth quarter and outscored the Lady Bulldogs 24-15 after trailing Holmes 53-50 at the end of the third quarter.

“It is good to get the win to start the season against a good team like Holmes,” said Co-Lin women coach Gwyn Young. “The girls played hard and we managed to make the plays that we needed to win at the end. Overall, I was pleased with our first game efforts, but we still have to continue to improve offensively and defensively to get better.”

The Bulldogs had three players to reach double figures as Aja Williams led the charge with 23 points. Minyone Hill netted 12 points and Tiffany Jones had 10 points.

Co-Lin outrebounded Holmes 43-41. Jones led the Lady Bulldogs with 11 rebounds. Allen was the leader on the boards for Co-Lin with 12 rebounds. Hall gathered 11 rebounds.

The Co-Lin Wolves and Holmes Bulldogs kicked off the season with a tough defensive battle in the first half as the Bulldogs carried a slim 33-31 lead into halftime.

In the second half, the Bulldogs captured a 10-point lead with 10 minutes left in the contest. The Wolves (0-1) responded with a 10-point run of their own to tie the contest with 8 minutes left, but Holmes managed to outscore Co-Lin 19-12 in the final minutes to secure the win.

“This was a tough loss to start the season,” said Co-Lin coach Kenny Bizot. “The guys came out and played hard in the first half, but Holmes made some defensive changes in the second half that forced us to shoot too many shots from the outside, instead of working it in the paint.

“We need to be more physical in the paint to be able to compete in this tough league,” said Bizot.

Donte Watson was the top shooter for Co-Lin with 22 points. Jonathon Dalton chipped in 20 points and Darius Kennedy netted 10 points. Tyler Turner and Dalton directed the Wolves on the boards with five rebounds each.

Daryl Macon sparked the Bulldogs with a game-high 26 points. Dietrich Taylor contributed 17 points. Cedric Harper scored 14 points and was the leader on the boards with eight rebounds.

BC wins two over Enterprise