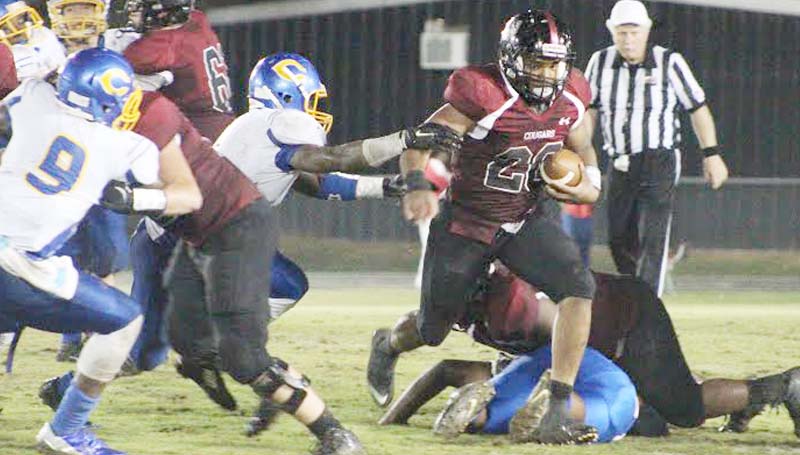 MONTICELLO – Lawrence County rolled to a 40-21 victory over Columbia in the opening round of the state 4A playoffs Thursday night. LCHS got 223 rushing yards and three touchdowns from Quitten Brown, and Charl’Tez Nunnery rushed for two touchdowns and threw for another, as the Cougars outgunned the Wildcats.

With the win, Jaymie Palmer’s Cougars improved to 11-1 on season, while Columbia, under coach James Harvey, finished its season with a 4-6 mark.

“The goal in the playoffs is to extend your season,” Palmer said, “to survive for another week. We were able to do that tonight. We’re proud of the season we’ve been able to put together, and we hope to keep it up for awhile.”

Against Columbia, the Lawrence County offense piled up a whopping 511 yards of total offense. The Cougars rushed for 375 yards, and Nunnery passed for 136. LCHS rolled up 24 first downs, and enjoyed football possession for almost two-thirds of the game.

After an exchange of punts, Lawrence County drove 66 yards in four plays, overcoming an intentional grounding penalty along the way. Brown rushed for 19 yards and caught a 24-yard pass. Tight end Marcus Kees had a 26-yard reception, setting up Nunnery’s five-yard touchdown run. The Cougars led 13-6.

After a Columbia punt – punter Osiel Garcia punted a whopping seven times – Lawrence County quickly cashed in again. T-Tez Cole grabbed a 47-yard touchdown pass from Nunnery, making it a 20-6 game at halftime. The Cougars had a 13-play drive late in the half, but stalled on downs at the Columbia 20-yard line.

Lawrence County upped its lead to 27-6 at the start of the third quarter, driving 61 yards in seven straight running plays. Brown and Cole shared the load, with Brown scoring on a two-yard run. Columbia stayed in the game, however, as Fredrick Peters answered Brown’s score by racing, untouched, 69 yards for a touchdown. Peters than ran for 2 points, cutting the Cougars’ lead to 27-14.

It stayed that way until early in the fourth quarter, when Brown capped a nine-play drive with a three-yard touchdown run. Nunnery’s 47-yard run, on which he gained a great lead block from Cole, helped to set it up. LCHS led 33-14.

Columbia kept its fading hopes alive by scoring on its next possession. Webb connected with Austin Fountain for nine yards and a touchdown, cutting Lawrence County’s margin to 33-21.

Lawrence County finished the Wildcats off moments later, with Brown scoring on a 12-yard run. Brown’s third touchdown of the night was his 32nd of the season, a certain school record. Brown also had the Cougars’ lone defensive takeaway of the night, a fourth-quarter fumble recovery.

Cole, the Cougars’ senior standout at linebacker, had a good night on offense. He rushed nine times for 51 yards and caught two passes for 68 yards and a touchdown.