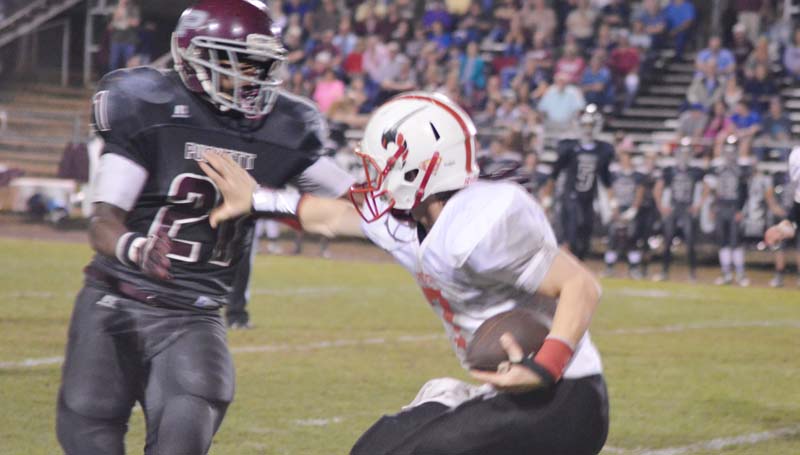 PUCKETT – Puckett ended Loyd Star’s season with a 75-19 blowout Thursday night in the opening round of the Class 2A state playoffs.

“I am very proud of the effort my boys gave tonight,” said Puckett coach Jason Goodwin. “I told them that this is a new season and we have to take it one week at a time. Loyd Star’s Coach Cook and his coaching staff have done a great job with guys this season. They fought hard and never gave up. I also want to give credit to Parker Flowers for staying in the game and playing his heart out, despite being injured.”

In the opening quarter, Puckett wasted no time putting their fast-paced offense in motion as Austin Fletcher scored the first of 61 points for the Wolves in the half on a two-yard rushing touchdown.

Puckett would add another score with 4:10 left in the first quarter when Anderson Jarquez sprinted in a 75-yard rushing touchdown.

Puckett continued to add to their lead in the first when Jaumonie Crain scored on a 25-yard fumble recovery. Jarquez caught a 20-yard pass from Joseph R. Anderson for a touchdown.

Loyd Star finally got on the board with a 98-yard kickoff return from James Beard. Loyd Star made their first of two extra points.

The Wolves responded with two-yard rushing touchdown by Jarquez to end the first quarter. Puckett led 35-7.

In the second quarter, it took a matter of seconds for Puckett to find the end zone again as Zyshawn Rawls blocked a lateral pass from Loyd Star’s Parker Flowers, and returned it for a 15-yard touchdown. Puckett went for the extra point, but Loyd Star’s Beard was able to block the kick.

Fired up from the blocked extra-point, Loyd Star would respond with a touchdown of their own with 8:21 left in the half when Shay Hodges caught a seven-yard pass from Flowers. Puckett would return the favor and block Loyd Star’s extra point.

With 4:19 left in the half, Puckett’s Jarquez would find the endzone once again on a 35-yard rushing touchdown.

The Wolves would score again with 20 seconds left in the half as Sedevyn Gray punched in a 20-yard rushing touchdown. At halftime, Puckett had a commanding 61-13 lead.

The Wolves would score again on a quarterback keeper and with 8:16 left in the final quarter, Puckett would recover a fumble and score.

Loyd Star’s Beard would score the final points of the game on a 30-yard pass from Flowers. The Hornets decided to go for the two-point conversion but were stopped.

“I am extremely proud of my team for playing through everything,” said Loyd Star coach Adam Cook. “We knew coming into the game Puckett plays fast and it caused us some problems. Injuries plagued us and forced us to have to come up with a new game plan. Puckett’s coach Goodwin is doing a great job with his team. I am already looking forward to next season.”

Loyd Star finished the season with a 4-8 (2-3 region) record. Puckett will advance to the second round and face the winner between Taylorsville and Enterprise-Clark.