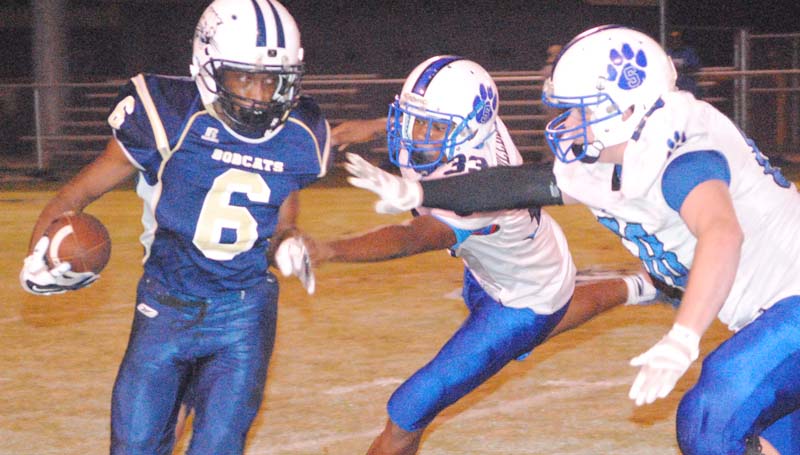 BOGUE CHITTO – With both teams fighting for their second win of the season, the Springfield, Louisiana Bulldogs overpowered the Bogue Chitto Bobcats 49-16 Thursday night at Troy Smith Field.

The Bulldogs were powered on the ground by junior running back Damarias Claiborne with 162 yards rushing on 13 carries and a touchdown. Junior fullback Kaleb Frickey also helped the Bulldogs with 12 rushes for 146 yards and four touchdowns.

“Glad to get the win,” said Springfield coach Ryan Serpas. “Bogue Chitto has a very good, well-coached team. They came out and fought us hard until the very end. Overall, I am very proud of my guys. We managed to gain the momentum in the second quarter and never looked back.”

In the opening period, both teams fought in a scoreless contest until the 4:12 mark, when Springfield quarterback Keenan Austin ran in a nine-yard rushing touchdown to put the Bulldogs up 7-0 after Steven Johnson kicked the extra point. Johnson finished the night making 6-of-7 extra point attempts.

In the second quarter, the Bobcats roared back to take the lead when BC’s senior quarterback Conner Douglas rushed in a nine-yard touchdown with 9:34 left. The Bobcats were successful on the two-point conversion as Douglas hit Kobe Robert in the endzone to give BC a 8-7 lead.

After the score, Springfield answered with a 35-0 explosion to take command of the game. It led 42-8 after three quarters of action.

In the final period, the Bobcats would put together their final touchdown drive of the season with 9:55 left when Douglas connected with Terence Morgan on a 63-yard pass to put the ball at the 3-yard line. Morgan would later punch in the touchdown. BC elected to go for the two-point conversion and was successful – Douglas hit Trey Nettles in the endzone to cut into Springfield’s lead at 42-16.

The Bulldogs would later answer with a late score as William Barnett sprinted in a 47-yard rushing touchdown to put the Bulldogs up 49-16 with 50 seconds left in the game.

“This was a tough loss for our seniors to leave out on,” said BC coach Gareth Sartin. “Mistakes hurt us early and we couldn’t recover from it. Overall, I was very pleased with my guys’ efforts. They fought hard until the very end in every game and no one gave up.”

Offensively, senior running back Kobe Roberts led the Bobcats with 13 rushes for 117 yards.

Douglas completed 8-of-17 passes for 45 yards. Morgan was the top receiver for BC with three catches for 77 yards.