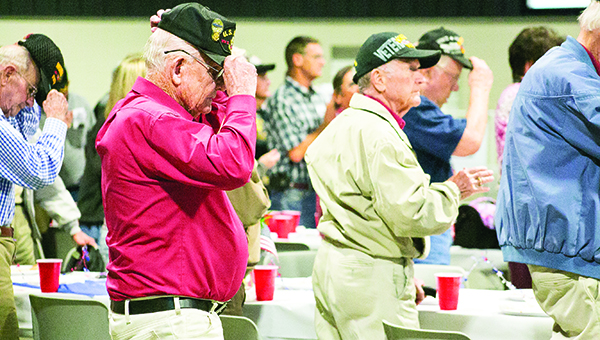 Photos by Kaitlin Mullins / Local veterans replace their caps after the National Anthem during the Veteran’s Day Celebration at the Lincoln Civic Center Tuesday night.

Today, the nation takes time to recognize, honor and thank the many veterans whose service has protected and enabled all citizens to enjoy life in the U.S.A. The Veterans Day Celebration Tuesday night at the Lincoln Civic Center gave the community the opportunity to show local vets how much they are appreciated.

“It’s a great honor,” said Luther Carlisle, a veteran of World War II in the 28th Infantry division. He was attending the event with his brother, Henry Carlisle, who also answered the call by serving in the Air Force during Korea.

“We appreciate so much the people willing to honor us,” Luther said.

“It means a lot,” Henry said. “We’re thankful for the people that realize that we did something for our country.” 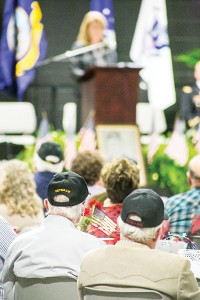 The event featured a dinner and a program along with music and door prizes. A major sponsor of the event was Sen. Sally Doty, R-Brookhaven, who moderated the program with help from Quinn Jordan, Representative-elect Vince Mangold, R-Brookhaven, Rep. Becky Currie, R-Brookhaven, and Jack Rutland who gave the welcome, invocation, pledge and talked about the Military Memorial Museum, respectively. The Copiah Lincoln Community College Choral Ensemble performed the National Anthem.

The Co-Lin Ensemble performed the song of each branch of the military for which different groups of veterans rose to be acknowledged. It was a poignant moment for those in attendance to honor and recognize each branch’s local members. On screens behind the stage, the portraits of many local veterans were shown.

The speaker was Hugh A. McCallum, LTC, LG, MSARNG commander, 106th BSB. He said it was his great uncle, a retired colonel, who talked him into speaking at the event as well as his respect for veterans.

“I’m in awe of being in the same room with the veterans of World War II, Vietnam, Korea —  they’ve done so much,” McCallum said. “And I have so much regard for them, and always will.”

“I think it is very important for all of us to say thank you,” Doty said. “And for us all to teach the next generation about our history and teach them to say thank you for the service to our country.”

Copiah-Lincoln Community College recently released its 20/20 Vision Strategic Plan, which was approved at a recent board meeting. The plan,... read more