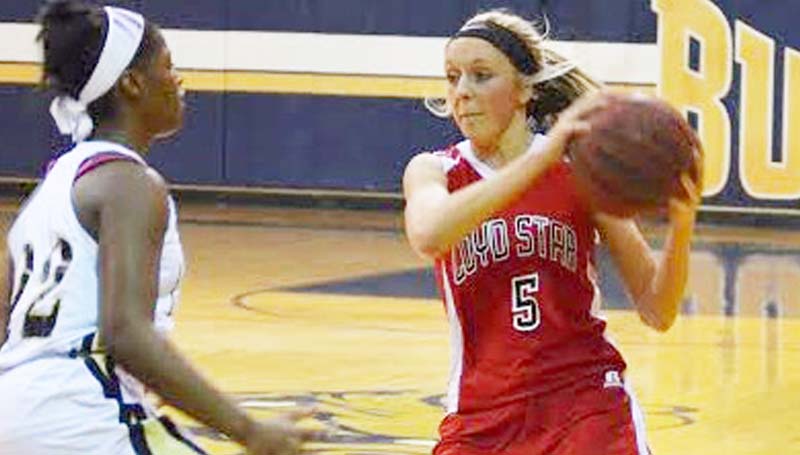 MEADVILLE – The Loyd Star Lady Hornets kicked off the basketball season Thursday night with a 54-29 win over the Franklin County Lady Bulldogs.

In boys’ action, the Bulldogs rallied back in the second half to defeat the Hornets 61-47.

Loyd Star will resume action Tuesday as it travels to Bogue Chitto to take on the Bobcats. Junior high action starts at 4 p.m., followed by the varsity games at 6 and 7:30 p.m.

The Lady Hornets and the Lady Bulldogs battled in a close first quarter as Loyd Star led 14-11. In the second period, the Lady Hornets put together a 14-8 run to extend their lead to 28-19 at halftime.

In the second half, Loyd Star continued to overpower the Lady Bulldogs, outscoring Franklin County 26-10 to secure the win.

“We played extremely well as a team,” said Loyd Star coach Gene “Moochie” Britt. “The girls came out strong and executed both offensively and defensively. Overall, I was proud to get the win.”

In the opening quarter, the Hornets came out strong and took a commanding 17-8 lead, but the Bulldogs battled back in the second period with a 17-5 run.

In the second half, Franklin County outscored Loyd Star 36-25 to secure the win.

“We came out and played really well in the first half,” said Britt. “In the second half, turnovers hurt us and Franklin County capitalized on our mistakes. Overall, we played well, but we have to work harder to get better.”

Javion Beard was the top scorer for the Hornets with 22 points – he also had eight rebounds, four blocked shots, five steals and two assists. Levi Redd provided a double-double performance of 20 points and 10 rebounds. Patrick Price and Avery Leggett had two points each. Gregory scored one point.

The Lady Hornets fell short Thursday night with a 1-0 loss as Brookhaven scored the winning goal late in the... read more