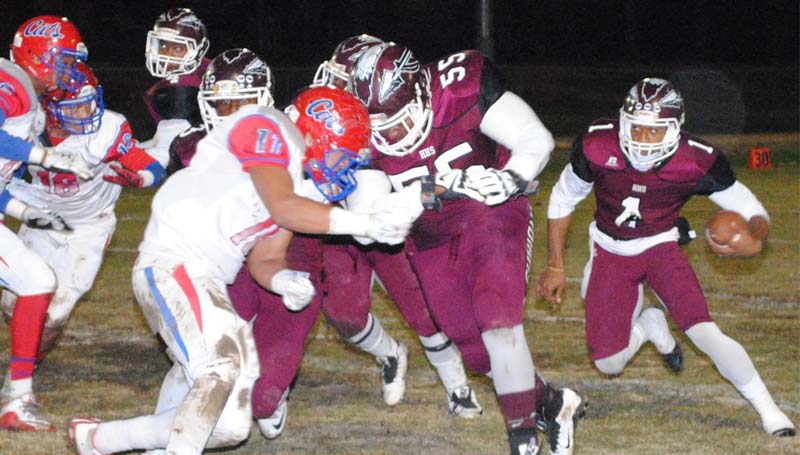 HAZLEHURST – The undefeated Hazlehurst Indians showed off their speed and strength Friday night as they eliminated the Forest Bearcats 18-0 in the second round of the Class 3A playoffs.

The Indians’ defense held the Bearcats to 115 yards of total offense, while Hazlehurst finished with 423 yards.

“Our guys came out and played really well tonight,” said Hazlehurst coach Todd McDaniel. “We knew coming in that it would a tough, defensive battle until the very end. Our defensive players played a great game from start to finish to earn the shutout. Overall, I was very please with our performance on offense, defense and special teams. This was a great team effort from everyone. Now, we must regroup and start preparing for another tough test next week.”

After a scoreless first quarter, the Indians punched in the first touchdown of the night on a 8-yard run by Damariun Wilson with 9:30 remaining in the second.

Hazlehurst attempted three two-point conversions in the game but was unsuccessful on all three.

Throughout the rest of the half, Hazlehurst’s defense dominated and the Indians carried a 6-0 lead into halftime.

Hazlehurst cashed in another rushing touchdown on a 21-yard sprint by junior running back Malik Gray with 6:32 left in the third period.

In the final period, Hazlehurst punched in its final touchdown of the game with 8:54 remaining when Wykeen Craft scrambled in a 5-yard rushing touchdown.

For Forest, K’hari Parker led the Bearcats with 41 rushing yards on 12 carries. He also completed 5-of-16 passes for 43 yards.

Howard Smith was the top receiver for the Bearcats with two catches for 20 yards. Anfrony Chambers had one reception for 10 yards.

Defensively, Tim Steward paced Hazlehurst’s shutout performance with 10 tackles and one interception. Billy Johnson and Patrick Harris provided eight tackles apiece and both had a sack each. Anfernee Jordan had a interception and three tackles.

The Indians (12-0) will be on the road Friday as they travel to Foxworth to battle the West Marion Trojans in the third round of the Class 3A playoffs. Kick off is at 7 p.m.