MONTICELLO – Lawrence County’s magical football season is still alive – but just barely. The Cougars fought off a challenge from East Central in the second round of the 4A playoffs. LCHS won 26-20 when Quitten Brown swept the right side for a 9-yard touchdown run in the second overtime series. The teams were knotted at 14-14 at the end of regulation, and again at 20-20 after one overtime session. 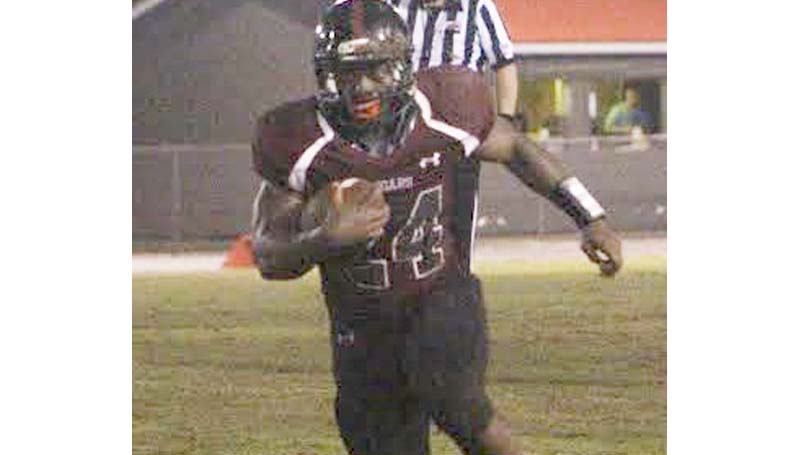 With the win, Jaymie Palmer’s Cougars improved to 12-1 on the season, the second-highest win total in Lawrence County High’s 29-year football history. East Central, coached by Seth Smith, finished its season at 7-5.

“This was a great win for our team,” said Palmer. “They fought their hearts out tonight. The same can be said for East Central, too. Their kids didn’t deserve to lose this game. Neither team did.”

While Lawrence County came into Friday’s game with a better record, East Central was thought to be a tough draw for the Cougars because of the Hornets’ grind-it-out style of play. Those fears were warranted, as East Central amassed behind a massive offensive line and handed the football to senior tailback A.J. Davis a whopping 40 times.

East Central led in first downs, total offense, rushing yards and time of possession, but it will be Lawrence County that travels to Vancleave for a third-round game Friday.

The LCHS defense, led by senior linebacker T-Tez Cole, stood strong, fighting seemingly all night with its back to the end zone. Four different times East Central got within the Lawrence County 10-yard line and came away with no points. Unofficially, Cole was credited with 17 tackles.

“Our defense played hard,” said Palmer. “It’s so hard to get off the field against that offense. This wasn’t an ideal matchup for us. Our defense had to play hardball tonight, and the guys did a dang good job of it.”

After an exchange of punts to start the game, East Central got all the way to the LCHS 6-yard line, only to be turned away on downs. After that, long plays by both teams ended in lost fumbles. In the Cougars’ case, Nunnery hit a streaking Kejuan Brown for 77 yards, only to have Brown fumble into the end zone. East Central recovered for a touchback. Two plays later, Lawrence County’s Mark Rhodes recovered a Davis fumble after a 36-yard run.

Early in the second quarter, East Central drove all the way to the LCHS 5, only to again be turned away on downs. Maintaining their good field position, the Hornets got on the board on their next possession, scoring on a 1-yard sneak by quarterback Glenn Evans. It was 7-0.

Lawrence County responded quickly. Quitten Brown had runs of 29 yards and 10 yards, setting up Kejuan Brown’s 15-yard touchdown grab. Josh Stephens’ extra point knotted the game at 7-7. East Central got as close as the Cougars’ 17-yard line right at the end of the first half, but the clock ran out before the Hornets could get off a field goal attempt.

Taking over at its own 20, Lawrence County put together an 8-minute, 12-play masterpiece. At the end of the drive, it took a 23-yard touchdown run by Rykendrick Harness to overcome a holding penalty. Stephens’ kick gave the Cougars a 14-7 lead with 2:56 left in the game.

LCHS got the ball first, and scored on Quitten Brown’s one-yard run. The Cougars’ extra point attempt was blocked, however, giving much hope to the visiting Hornets. The Lawrence County defense almost made another great stand, but A.J. Davis barely edged the football across the goal line on a fourth-and-three play. East Central needed only to make the extra point to advance to the next round, but the extra point snap was high, sending the game into another overtime period.

This time, the Cougar defense pushed the Hornets backward, forcing a 35-yard field goal attempt that missed. Two plays later, Quitten Brown’s nine-yard run sent Lawrence County’s massive home crowd into an frenzy – and sent the Cougars off to a date with Vancleave.

“I’ve coached in a lot of exciting games,” said Palmer, who was Brookhaven’s offensive coordinator when Ole Brook won a state 4A championship in 2004, “and this was one of them. I’ve very proud for our kids, proud that they’re getting to experience some success. They deserve it.”