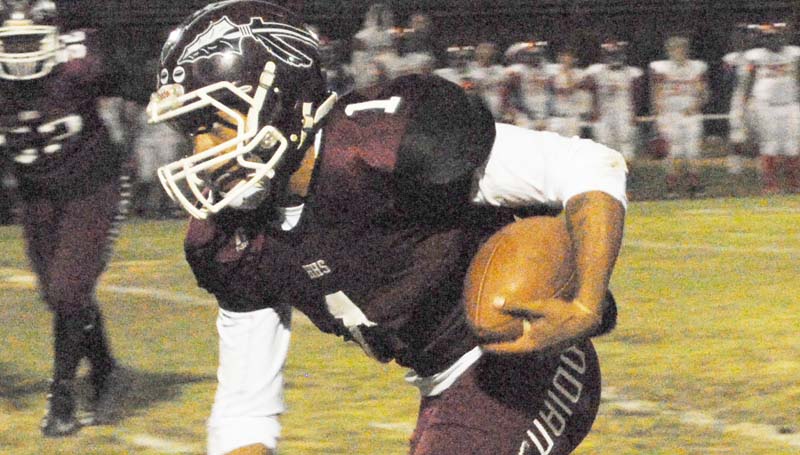 Daily Leader / Marty Albtight / Hazlehurst senior quarterback Ladarrious Williams (1) and the rest of the Indians will visit Foxworth Friday to battle the West Marion Trojans. Kick off is at 7 p.m.

Hazlehurst (12-0, 5-0), coached by Todd McDaniel, used its speed and toughness to wear down the Forest Bearcats to clinch a 18-0 win and advance to the third round of the playoffs.

This week, the Indians are preparing for another tough battle as they visit Foxworth to battle the West Marion Trojans.

The Trojans (12-1, 4-1), coached by Brad Duncan, defeated Choctaw County 32-19 in the opening round and beat Raleigh 36-30 last Friday to host the third round of the playoffs.

Senior quarterback Josh Miller has a strong arm for the Trojans – he has completed 162-of-253 passes for 2,394 yards, 24 touchdowns and 10 interceptions on the season. He also has rushed for 695 yards on 159 carries on the season.

Adrian Miller is the top receiver for West Marion with 55 catches for 790 yards. Money Gaddis is second in the receiving corps with 45 catches for 712 yards. Damien Johnson has caught 33 passes for 462 yards. Batie has 18 catches for 306 yards.

Defensively, Jamarious Lewis is the leader on the season for West Marion with 113 tackles. Braxton Smith follows with 112 tackles. Kevon Alford has 95 tackles on the season.

Defensively, Tim Steward paced Hazlehurst’s shutout performance with 10 tackles and one interception. Billy Johnson and Patrick Harris provided eight tackles apiece and both had a sack each. Anfernee Jordan had an interception and three tackles.

The Wesson Cobras and Lady Cobras captured a pair of victories over the Brookhaven Panthers in high school soccer action... read more