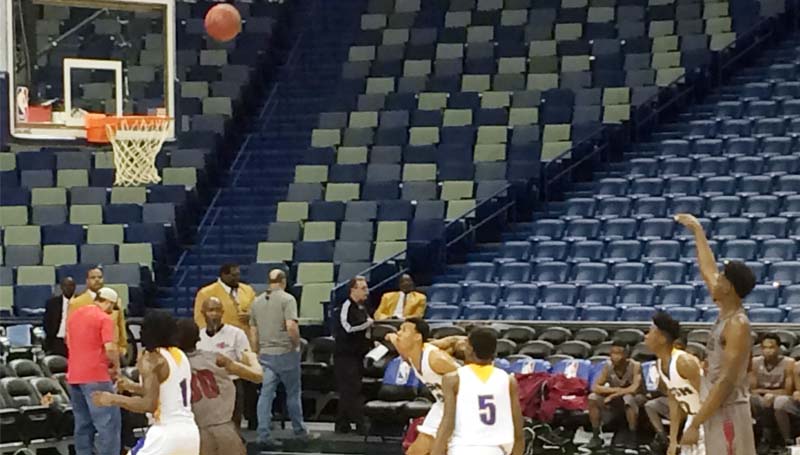 NEW ORLEANS – The Lawrence County Cougars and the Crystal Springs Tigers got a rare treat on Friday, facing off in high school basketball action at the Smoothie King Center in New Orleans, home of the New Orleans Pelicans.

In the game, which preceded the Pelicans’ contest with the San Antonio Spurs, Lawrence County defeated Crystal Springs 49-44. After falling behind early, Pat Bridges’ Cougars grabbed the lead in the second quarter, then managed to hold that narrow lead for the remainder of the game.

With the win, Lawrence County improved to 3-1 on the young season. Crystal Springs, coached by Broderick Owens, fell to 4-1.

“It was a neat experience for our kids,” said Bridges. “We appreciate everyone who made it possible. Obviously, we’re happy that we won the game. Crystal Springs is a quality opponent.”

Powered by Gabriel Lewis’s eight second-quarter points, Lawrence County clawed out a 28-23 halftime lead. Lewis’s three-pointer at the start of the second half gave LCHS its biggest lead of the game, at 31-23. Crystal Springs kept it close the rest of the way. The Cougars’ win wasn’t secured until the final seconds of the game.

Lewis and Phillip Moore led LCHS with 14 points each, and Keyshawn Feazell hit double figures with 11. Moore, Feazell, and Vernell Garner led the Cougars in rebounding with six points each.

Jericko Morris (17 points) and Tyreonte Davis (14) combined for 31 of the Tigers’ 44 points. An anticipated big-man matchup between Lawrence County’s Feazell and Crystal Springs’ Roderick Smith didn’t totally pan out. Smith fouled out of the game with six points.

Lawrence County will return to more familiar surroundings on Monday and Tuesday, as the Cougars and Lady Cougars host their annual Thanksgiving Classic. There will be games throughout both days.

MCLAURIN – The Enterprise Jackets and the McLaurin Lady Tigers were victorious in Thursday night basketball action. In the girls’... read more