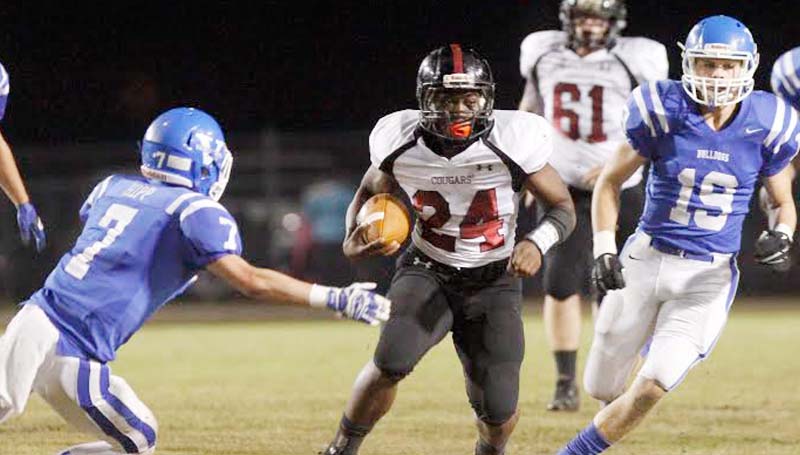 VANCLEAVE – The Lawrence County Cougars defeated the Vancleave Bulldogs 35-21 Friday night and will host the South State 4A finals.

With the teams tied at 14-14, the LCHS offense tallied touchdowns on its final three possessions to secure the win.

Jaymie Palmer’s Cougars improved to 13-1 on the season, and advanced to the South finals for just the second time in Lawrence County High’s 29-year football history. Vancleave finished the season at 6-8. The Bulldogs started the season at 3-7, but had won three straight – their final regular season game and two playoff victories – to get deep into the playoffs.

“It was another great night for our kids,” said Palmer. “They got tested again tonight, but won the game in the fourth quarter. I couldn’t be prouder of them. It’s an honor to get to coach this team for another week.” 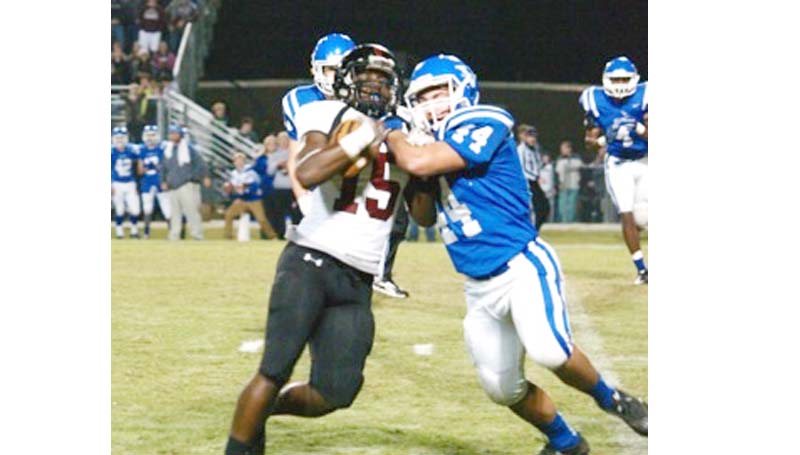 The win earned Lawrence County the right to host St. Stanislaus Friday, with a trip to the 4A state championship game on the line. St. Stanislaus, 10-3, rolled to a 44-20 win over Moss Point on Friday.

Against Vancleave, the Cougars rolled up a whopping 529 yards of total offense, with three different runners eclipsing the 100-yard mark. Quitten Brown continued to amass yards and touchdowns. He gained 234 yards on 21 carries, and scored three touchdowns. Quarterback Charl’Tez Nunnery rushed for 110 yards and passed for 57. T-Tez Cole gained 105 yards on just four carries, including two of the biggest plays of the game.

After an exchange of punts to start the game, the Cougars grabbed a 7-0 lead on Nunnery’s 25-yard touchdown run. A 40-yard Quitten Brown run, on the previous play, set it up. Josh Stephens kicked the first of five straight extra points.

It remained 7-0 until midway through the second quarter, when Vancleave quarterback Parker Borque hit wingback Cade Posey for 68 yards, all the way to the LCHS nine-yard line. Four plays later, on fourth down, Borque scored on a two-yard run, tying the game at 7-7.

Lawrence County responded with a seven-play, 81-yard drive, with Nunnery ripping off runs of 35 and 34 yards. Brown’s three-yard run gave the Cougars a short-lived 14-7 lead.

Again, Vancleave responded. Posey ran for 38 yards, with 15 yards added because of a facemask penalty. Four plays later, Posey scored on a three-yard run. The game was knotted at 14-14 at the half.

The third quarter was dominated by defense, with five straight possessions ending in punts. Late in the third, long-time LCHS stalwart T-Tez Cole started making big plays. First, he hauled in a 23-yard pass from Nunnery, getting the Cougars out of their own end of the field. Two plays later, with Nunnery shaken up and the Cougars facing a second-and-15, Cole moved to quarterback. After faking to Brown, Cole broke tackle after tackle on a 54-yard run. On the second play of the fourth quarter, Brown scored on a 14-yard run, giving Lawrence County a 21-14 lead.

After the LCHS defense forced another punt, the Cougars took a two-touchdown lead with 7:18 lead left in the game. After Brown ran for 20 yards and 15 yards, Cole, back at fullback, burst up the middle on a trap play, going 47 yards for a touchdown. It was 28-14.

Vancleave did not go quietly. Going to a hurry-up offense, Borque passed the Bulldogs down the field quickly. David Capers scored on a two-yard plunge with 5:33 left, cutting the Cougars’ margin to 28-21.

Vancleave elected to kick off deep and put its hopes on the shoulders of the Bulldog defense. Lawrence County’s offense had other ideas. The Cougars put the game away with an eight-play, 80-yard drive. The key play was a 22-yard Nunnery-to-Cole pass that converted a key third-and-3 situation. Brown then ran for 34 yards, and scored on a two-yard run.

Vancleave’s final attempt to challenge the goal line was stopped by a Kejuan Brown pass interception with one minute left in the game.

“I thought our guys did a great job in the fourth quarter,” said Palmer. “That’s two weeks in a row that our guys had to dig deep, and they came through. I thought we had a good night defensively as a whole, but our defense was really good in the second half. We had a good night on special teams, too.”

Unofficially, Lawrence County inside linebackers T-Tez Cole and Azar Myles were each credited with 15 tackles.