Running the race with endurance 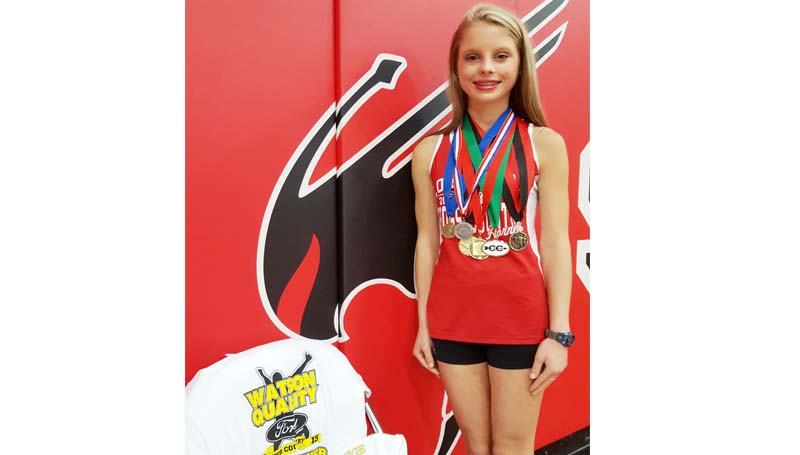 Daily Leader / Photo submitted / Loyd Star’s Abby Thomas has received many accolades in the sport she loves. Only in her sophomore year, the future is very bright for this young lady as she trains for her junior year.

Loyd Star’s sophomore Abby Thomas has a smile and warm personality that lights up a room. As you get to know her, you will come to realize she has a passion that she will gladly share with you and give God the credit for having the talent to do well. That passion is running.

“Running is my passion,” said Thomas. “I’m so thankful for all the support I have received from so many people, and the new friendships I’ve made along the way. I give God the credit for my accomplishments. God had allowed me to achieve my goals and has given me the faith and dedication to set new goals to reach for.

I believe our cross-country team has had a successful season with help from our coach, Michelle Case, pushing each other to do our best, and the support of family at each race,” said Thomas. “I’m looking forward to the next years of cross-country at Loyd Star.”

Loyd Star is in its second year of cross-country and is led by Case. The Hornets and Lady Hornets have been quite successful over the two-year period with several high individual placements and high team placements, but “Abby is truly the shining star at Loyd Star in cross-country,” her coach said.

“Abby started the 2014 season with a bang. She tried out and had a time of 12:05 for a mile and half. Since then she has excelled to newer and faster finish times,” she said. “She gives 110 percent whether it’s at practice or a meet. She is dedicated, hard working and determined.”

In the 2015 State Cross Country Championship race, Thomas placed 34th in the entire state. The best of the best run in the State Championship among the top seven runners from each team.

“When you put it into perspective, you see what an awesome runner this talented young lady is,” said Case.

As the 2015 season comes to a close, Thomas and her coach are already looking forward to the 2016 cross-country season.

This spring, Abby will put on her running shoes once again as she prepares to compete in track. Last year, she competed in the 3200 meter competition and finished fifth fastest in the state in the 2015 Class 2A State Track competition.

“This young lady is going places and by the grace of God, I can’t wait to see how far she will go,” said Case.