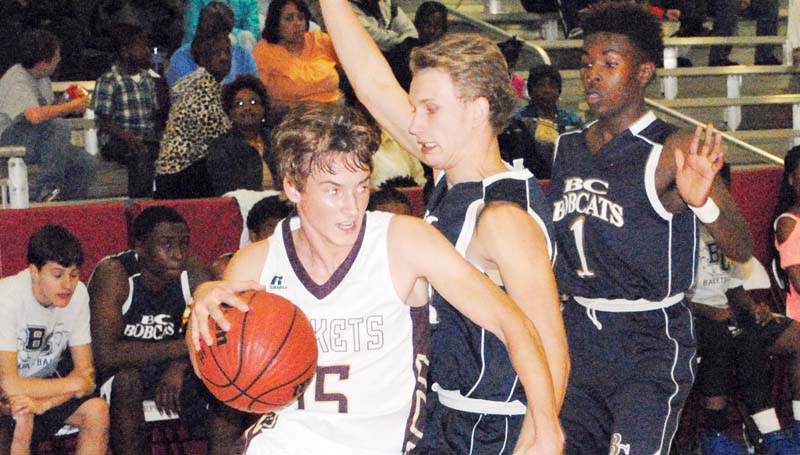 Daily Leader / Marty Albright / Enterprise’s Zach Hodges (15) drives the base line to get away from the BC’s pressure of Brandon McKenzie (21) and D.J. Nunnery Monday night.

The Bogue Chitto Lady Cats and the Enterprise Jackets were victorious Monday night in high school basketball action at Enterprise.

In the girls’ game, the Lady Cats roared past the Lady Jackets 67-42.

In boys’ action, the Jackets overpowered the Bobcats to claim a 93-64 victory.

Enterprise will be off the rest of the week, before returning to action next Tuesday as they host the St. Andrews Saints for four games, beginning at 4 p.m.

The Lady Cats came out strong in the opening quarter to claim a 21-9 lead. In the second quarter, the Lady Jackets charged back into the action, but BC managed to win the scoring battle 14-11 to take a 35-20 lead into halftime. 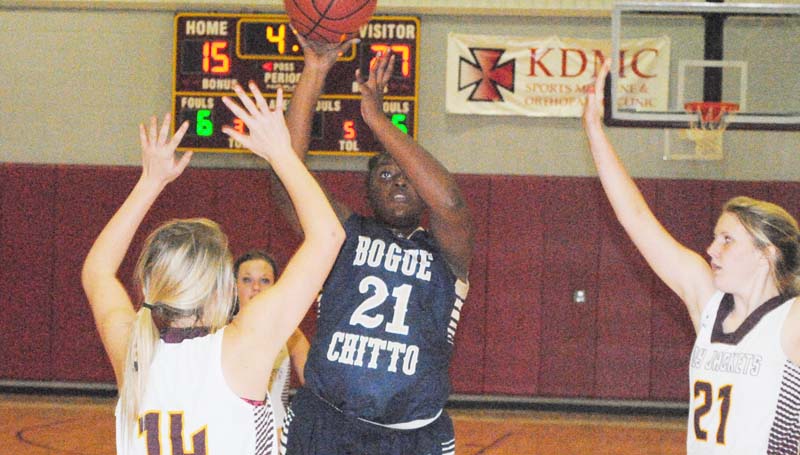 In the second half, BC outscored Enterprise 33-22 in the final two quarters to secure the win.

“We started off really well offensively, but we had periods that we did not score,” said BC coach Christi Terrell. “We still need to do a better job on the offensive boards. Overall, I was pleased with our team effort. The girls hustled and played hard.”

Carlee Nations was the top scorer for the Lady Jackets with 19 points. Courtney Greer chipped in with 10 points and had three rebounds. Alisa Barlow netted five points. Monisha Pendleton was the leader on the boards with four rebounds and scored four points. Haley Nations and Michelle Herrington had two points each.

“We have got to do a better job rebounding the ball,” said Enterprise coach Jill Nations. “Bogue Chitto has a very good team and we allowed them too many second-chance opportunities.”

Enterprise claimed a 20-15 lead after one quarter of action. In the second period, BC roared back to tie the game 20-20, but the Jackets answered with a 25-15 run to close out the first half leading 45-34.

In the second half, Enterprise won the scoring battle against BC 48-30 in the final two frames to claim a 93-64 win.

Cody Leggett, Braxton Wallis and Hunter Bland were the top scorers for Enterprise with seven points each.