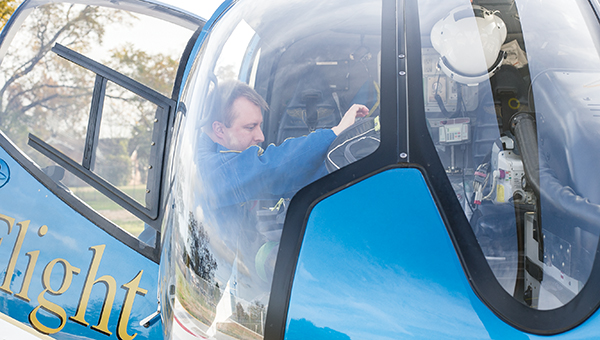 A new medical helicopter service in Brookhaven is one that serves area residents by providing quicker access to the medical care they need in times of emergency.

“[LifeFlight 4] provides air travel for those who need to be moved quickly,” David Culpepper, director of marketing at King’s Daughters Medical Center, said. “It is a plus for Southwest Mississippi to have that service here.”

Seth Brewer, a flight paramedic, said before moving its base from Hattiesburg to Brookhaven, the closest services like LifeFlight 4 were located in Natchez and Jackson. More rural areas with smaller hospitals, like Brookhaven, generally have patient transport needs often.

Sometimes a patient in critical care needs to be taken to a specialist elsewhere. In that case, the advanced medical equipment like cutting-edge ventilators and IV equipment within the Airbus helicopter EC-130 provides the level of care needed to transport the patient safely.

The helicopter essentially serves as a floating ER as well as an ICU, Brewer said. When injuries are severe and/or conditions are time-sensitive, patients often need to be transported to New Orleans, Jackson or Hattiesburg. Now, rather than an ambulance taking a patient to KDMC, or maybe going straight to Jackson, taking at least 45 minutes, patients with obvious immediate need may be picked up on site and arrive in Jackson in 25 minutes, at most.

LifeFlight 4 is a service independent of any hospital and serves any hospital within about 100 miles, said Brewer. Patients may be transported between medical facilities or picked up on-site, be it in a country field or the side of the highway or interstate.

Located on Hwy. 51 near the ambulances at KDMC, LifeFlight 4’s landing and launch pad is home to one helicopter. The staff includes four pilots, one part-time and four full-time flight paramedics and one part-time and four full-time flight nurses. The crew must meet requirements in critical care certification and in-flight emergency care, Brewer said, and participate in continuing education often.

Each day, LifeFlight 4’s Facebook page lists the names of the crew members on duty. Brewer said often emergency responders and hospital facility staff like to know who they might be working with that day, and also the new business in town likes to be involved.

The blue jumpsuit-clad LifeFlight 4 crew encourages communication with its new home and invites Brookhavenites to introduce themselves.

Reward should be offered in murder case

Five thousand dollars has been pledged as a reward to help solve an animal abuse case in Hinds County. PETA... read more