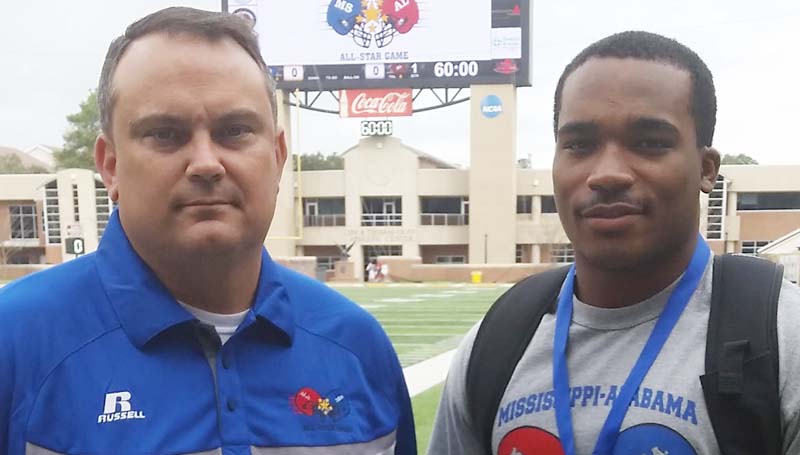 For T-Tez Cole it was a week of emotions. He was disappointed that an injury kept him out of Saturday’s Mississippi/Alabama All-Star Game, but he made some new friends while participating in the week’s events.

Cole, a 6-foot, 220-pound two-sport standout from Lawrence County, injured his leg in the 4A South State Finals two weeks ago. He sprained his ACL and MCL in his knee but no surgery will be required.

“The doctors told me that I just need to rehab my knee and in four to six weeks I should be good,” said Cole. “I wish I could have played in the game but still it’s been a good week just being part of it all from practice to meeting everyone.”

Right now Cole is part of an intense recruiting battle in the JUCO ranks. As a blitzing outside linebacker he’s weighing his options, which also include offers as a fleet footed corner outfielder.

“Several junior colleges have offered me a scholarship in both sports,” said Cole. “I don’t really have a favorite right now, I’m just going with the process and I’ll decide on Signing Day.”

Cole names Co-Lin, Southwest, Hinds, Pearl River, and Gulf Coast as schools that have offered him a scholarship in both baseball and football.

He’s also hearing from Meridian CC in baseball and East Mississippi in football.

“Right now getting my leg right for baseball season is my main focus,” said Cole, who missed a majority of last season on the diamond due to a right thumb injury.

“I had a good summer season in baseball,” said Cole. “A couple scouts from the Kansas City Royals and L.A. Dodgers talked to me. I’m just ready to play and have a good season.”