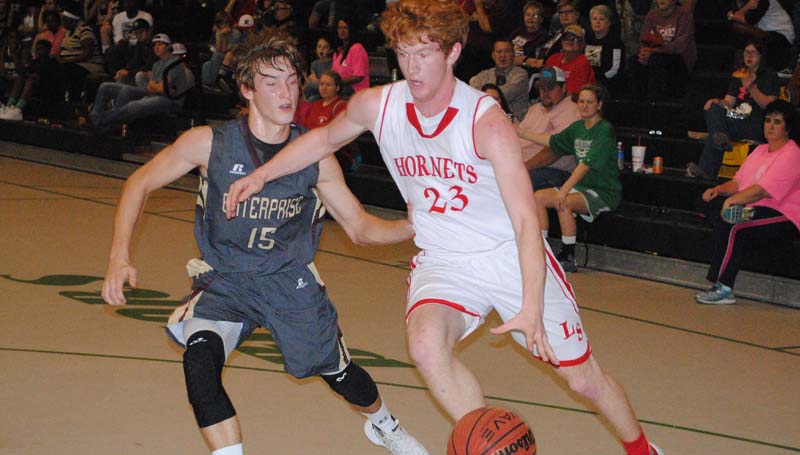 In the girls’ contest, the Lady Hornets overpowered the Lady Jackets to claim a 70-34 win.

In boys’ action, the Hornets handed the Jackets a 77-51 loss.

The Lady Hornets quickly dominated the Lady Jackets in the first quarter as Loyd Star secured a 18-2 lead and cruised to a 35-16 halftime advantage.

In the second half, Loyd Star continued to outscore the Lady Jackets with a 35-18 run in the final two periods to secure the win.

“The girls came out and played really well from start to finish,” said Loyd Star coach Gene “Moochie” Britt. “It was great to give everyone some playing time. The girls did a great job hustling on offense and defense.”

The Hornets bounced back after a tough loss Thursday night and outshot the Jackets (6-3) in the opening quarter to claim a 33-12 lead. They cruised to a 50-24 advantage at halftime.

In the second half, both teams scored 27 points apiece as Loyd Star held on to collect the win.

“The guys came out and shot the ball really well in the first quarter, ” said Britt. “Overall, I was pleased with our effort both offensively and defensively. It was great to get the win.”

Javion Beard pumped in a game-high 39 points and had three rebounds to lead the Hornets (3-2). Levi Redd provided a double-double performance of 21 points and 11 rebounds. Patrick Price chipped in with eight points and had seven rebounds. Avery Leggett netted seven points and Adicuz Harris had two points.

“Loyd Stars shot the ball really well in the opening quarter and we struggled to recover,” said Enterprise coach John Knight. “We are much better than we showed tonight and we will bounce back.”