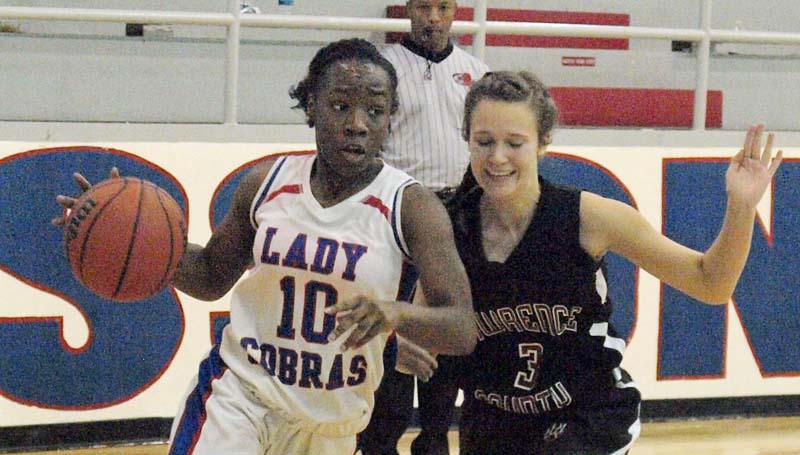 Lawrence County knocked off Wesson in a pair of varsity game Monday at the Snake Pit.

In the girls’ contest, the Lady Cougars defeated the Lady Cobras 51-29.

In boys’ action, the Cougars clinched a 51-44 win over the Cobras – the game was called in the third period due to a power outage.

Wesson will be in action today as it travels to Loyd Star to battle the Hornets in four games. Junior high action begins at 4 and 5 p.m., followed by the varsity games at 6 and 7:30 p.m.

Lawrence County will also be in action today as it travels to Crystal Springs to take on the Tigers for three games. Junior varsity action begins at 5 p.m., followed by the varsity games.

The Lady Cobras started the game strong, but the Lady Cougars rallied back to tie the game at 10-10 to end the first quarter. Lawrence County took the lead in the second and held on for the win.

For the Lady Cobras, Jashia Smith was the top scorer with nine points and had seven rebounds. Tashay Glasper was another scorer for Wesson with seven points and she had three rebounds and three steals.

The Wesson Cobras and the Lawrence County Cougars were unable to finish the game due to a power outage that knocked out the entire town’s electricity in the third quarter.

The teams were neck and neck at the end of the first half but the Cougars took the lead with some key shots by KeyShawn Feazell in the third.

The game was called with Lawrence County in the lead.

For the Cougars, Feazell was the scoring leader with a total of 16 points, nine rebounds and one steal. Gabe Lewis followed closely with 11 points and had three rebounds.